Maybe I’m just late to the modifying game, but looking through this forum, it seems all the experts that may have modified their GoTennas have all fizzled out around 2018. Where did they go? Are their hardware modifications still working? Did they provide the desired effect of more range? (I’ve seen all the MOAN discussion points and all George’s @gua742 range testing, but I’ve not seen that replicated in other builds yet…)

What happened to @dogshoes MMCX mod? Did it pan out? Was there in fact issues with the logic switch to get the MMCX to power?

Is there still an active goTenna Mesh modding community?

People come and go as they please on the forum. While I’ve been here for a while, I can’t say there’s ever been a large group of users modding the goTenna Mesh. There are some pics and tips scattered in a few threads that could be consolidated together or at least cited in one place. The basic info needed seems to be there, it just need to be consolidated for easy reference. If you’d like to help advance things, searching out, finding and linking to these items to bring together all this knowledge would be a great first place to start.

That said, the nature of the problem is not easy to solve. You basically have to destroy the case to gain access, so it’s repair or replacement is necessary. Once inside, the board is largely protected by a metal shield, which you’ll likely need to remove to access where work is needed. Then the board itself is mostly surface mount devices. You’ll need some skills and the right soldering station to make changes and the potential for bricking the board exists.

I put this out not to discourage you or anyone else, but to hopefully encourage people to mod and then explain (with a few pics) the process.

Agreed. I think I’m ready to mod. I’ve opened the case but I’m a bit gun shy on soldering. There seem to be conflicting soldering points depicted on the various threads.

There seem to be conflicting soldering points depicted on the various threads.

That’s one of the things that we need pinned down, so is exactly one of the reasons I suggested the need for someone to consolidate what has been posted in one spot for easy comparison.

I plan to mod a few of them in the coming month or two. @HugoER (& @MikeL), let’s coordinate on this so we can nail down the proper process that corresponds to the latest hardware rev!

I’ve had some detailed discussions with @gua742 on his experiences with the original MOAN, and I’d really like to attempt, verify, and formalize the process and options.

One recent thread I was following with some good photos was this one:

Here is a detail view from the above, and this is probably the first one I will try: 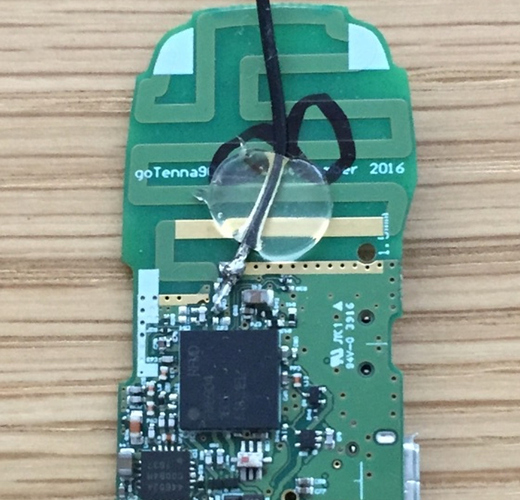 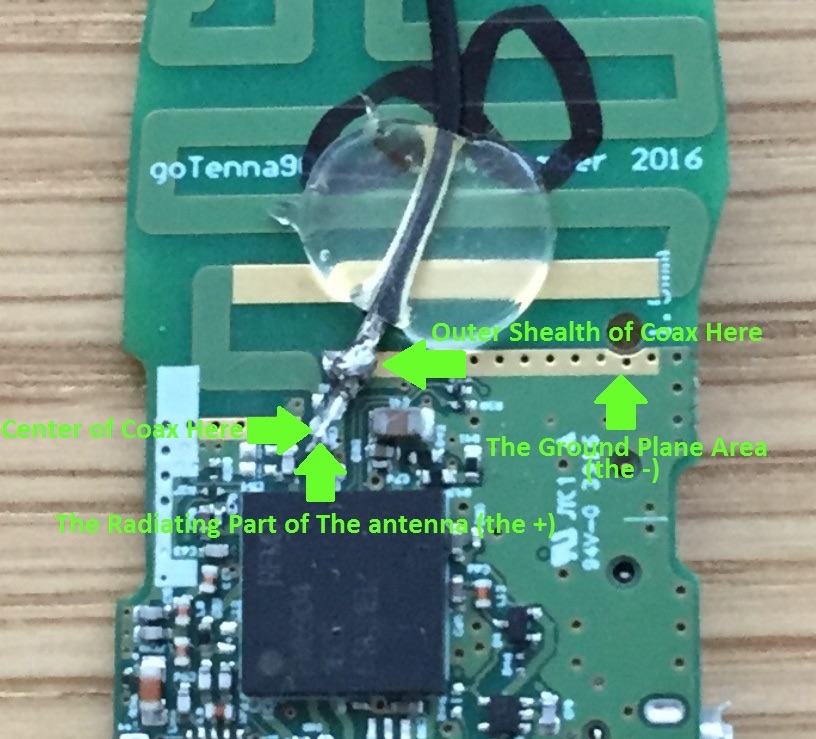 It makes sense to me that you would want to pretty much completely disconnect the onboard antenna to avoid issues, and this mod shows that completed. The coax sheath is connected to the pad with holes in it; the inner conductor is soldered to the chip-side pad of the C50 capacitor (red dot), and I believe the cap has been removed, disconnecting the rest of the onboard antenna. 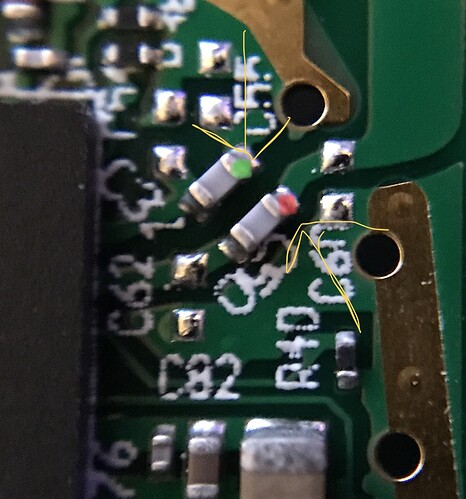 I think this spot is actually a great candidate for an MMCX surface mount jack, but I’ll tackle that in a later attempt.

MikeL: I’ve seen your name associated with quite a few of the threads I’ve searched so far. You hit the problem right on the head: it’s hard to find a consolidated “build” anywhere. I see that someone did try more recently but a lot of their links are broken.

We’re working on solution sets up here in Alaska and we’ll document our progress start to finish with check-ins after we have it up and running.

As to the case… after destroying the first one to gain access to the PCB to see what we were up against, I am confident we can open these open without as much damage for those that want to keep the original look to them. I will say, out intent was always to just use the board itself in a different enclosure to facilitate our different design needs.

Thanks for staying on the forums and lending some advice!
With Respect,
CAS

Would love to collaborate, Mike! We’ve successfully broken the case off one and have some ideas for the rebuild. Our first freed board will NOT go back into its original case.

The mods we plan on are:
Upgrade battery to a 1S 10000 mAh LiPo with XT30 connectors to allow quick changes of batteries. This battery will provide nearly 17 days of service. Variations of this mod will be to incorporate a second batt in parallel; and to add solar charging. Our problem in the frigid north is that the LiPo’s do not like to charge at sub-freezing temps… which is our entire winter period.

Upgrade antenna. Still in research mode on this one. I’ve seen those pics you mentioned and that seemed to be the conclusion as I’ve seen no new data or reports to suggest any other options. I had hoped for a simple MMCX connection as well, but it looks like you’d have to reconfigure the board logic to route signal to the MMCX. That is beyond my capabilities at the moment. My most likely scenario is to add two different types of antenna: 1) a “Rubber Duck” type that will mount to the top of the original case; 2) a full on 900 MHz, 50 Ohm, dipole antenna in a weather-proof casing that will be either permanently mounted to a building or attached to a collapsible tarp pole from REI (for base-camp activities).

Our research has concluded that trying to power one of these GTMs without a battery is not effective. Ideal state would be for GoTenna to release a “Base-Station” model that can be powered at all times from grid power and can accept a battery for when power goes down. (as opposed to these mobiles that require the power from the battery and will not live feed off the usb micro port). I think having this persistence would help develop the mesh they are seeking. With just a bunch of people with mobiles that need to be turned on and charged, we’ll never have the persistence of a network to be reliable.

also… can you please provide me @gua742’s email? I tried his website and it didn’t look right. Or, I’d love to hear what you learned from him: castees2732@hotmail.com

MikeZ and CAS,
Thanks for the kind words and even more for reaching back to engage with what we know about this.

The pics showing the coax hooked up to the C50 pad is suggestive, but I’m ultimately not sure about them. If you look just to the left in the magnified pic, you see some shiny pads marked C62, as if something were removed from it. You do want to disconnect the old antenna. So verifying what’s happening in these pics is a good place to start, as it may turn out to be useful.

Hello everyone.
Over the past half year, I was able to gather 6 devices.
I would like to mod it and plant at least 2 modified node in Vancouver island (B.C. Canada) where I live.
I’ve done some modification and know how to solder.
However, I am rookie in this field.
If someone can teach me, I would like to participate as well.

LOVE your city!! my family was down this past summer and throughly enjoyed it!

Do you know which version of the devices you have? Older versions do not have the RF shield on them; new versions do. The RF shield is a silver box mounted over the bottom half of one side. This will need to be removed first before accessing the bits to reconfigure on the board. We have not tried to get this off just yet.

For stationary power, a large capacitor instead of a battery should work to keep the Mesh unit active, though I’d externally feed the capacitor 4 volts for more efficiency (no cycling of the goTenna charge circuit and no red LEDs while charging the capacitor).

An external buck converter limited to C/9 charge rate and 4.1 volts could also work with a 3s NiMH pack if capacitors won’t provide the needed runtime. If I remember correctly, NiMH can charge slowly in cold temperatures.

Note that I haven’t tested any of these. These solutions are compatible with the voltage requirements for goTenna Mesh, but the Mesh’s charge circuit isn’t compatible with NiMH batteries.

Bump. I too am interested in a MOAN build that shows how to solder an antenna.

I ordered three TTGO T-Beam ESP32 LORAs to start dabling in LORA mesh tech, but the gotenna caught my attention. By the looks of it, the DIY LORA community has more DIY instructions.