The first step to hardware modification

Today I voided the warranty on one of my GoTenna Mesh.
How many of you have split the case open? How did it go? Did you break anything?

Mine came open, but I had to pry after cracking the weld, and knocked off the power switch. So I got to use the magnifying goggles that the grandchildren gave me for Christmas. And the tiny tip.

This is what I hope to accomplish: 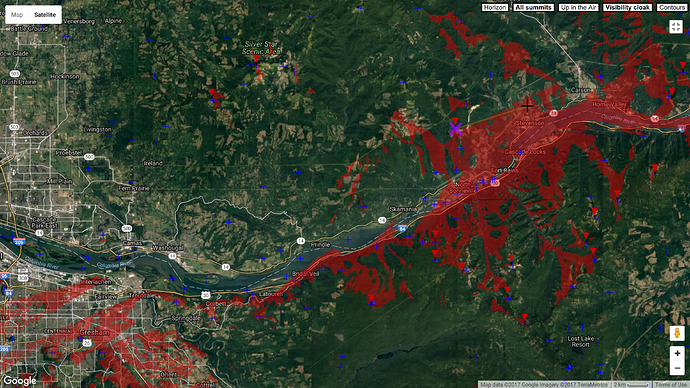 I had the same issue with breaking the power button. Quick solder job and it was aok. I put a a dab of hot glue to support and protect it.

Of course on the posted map the coverage is way overstated, but I love the view. It is 40km from Greenleaf to Gresham, and that is a bit for a watt. So I am going to play with the node placement and try for more complete coverage in the 5-10km range. It’s six to the Eagle Creek trailhead Our house on the hill (black cross) cannot even get down to Stevenson, less than 2 klicks. Trees and terrain.
Also I am now thinking patch antenna, as I only need like 160 degrees. 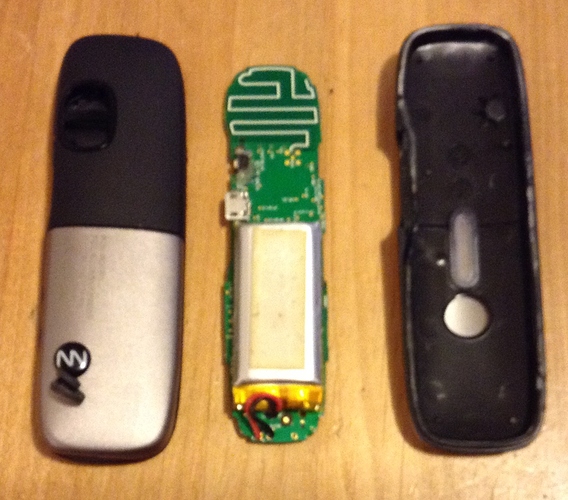 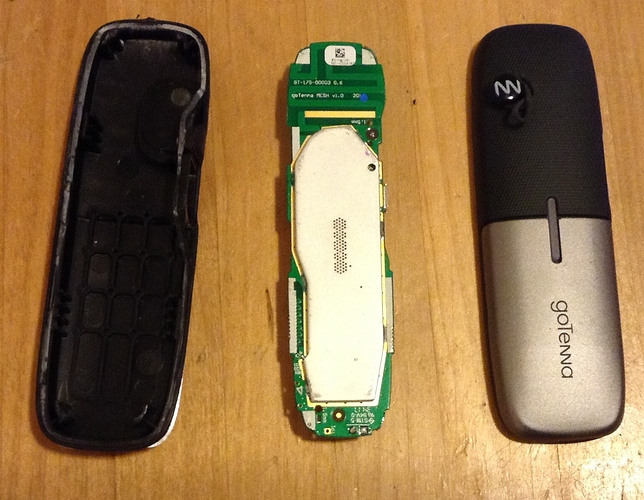 image.jpeg1529×1186 384 KB
I am putting these pics here mostly so that I don’t loose them. This is the goTenna mesh opened with the 3 pieces turned the same way. Of course I should be able to remember that the antenna is in the non-shielded end.
However looking at some of the relay units that people are doing without opening the case made me wonder this: could one cut a hole in their box (containing battery & charge controller)that was a good fit for the antenna end of the Mesh so that the antenna was in one less layer of polycarbonate. IDK if the attenuation of an extra layer of plastic is worth the effort.
Just throwing out an idea.
4 Likes
dennilee January 19, 2018, 10:14pm #6 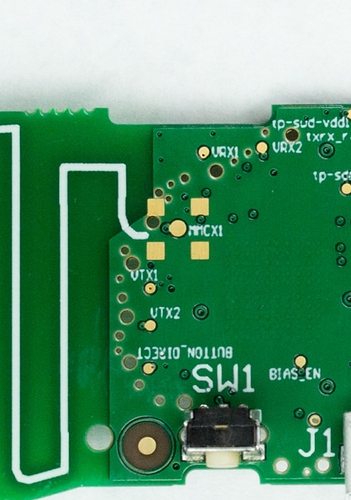 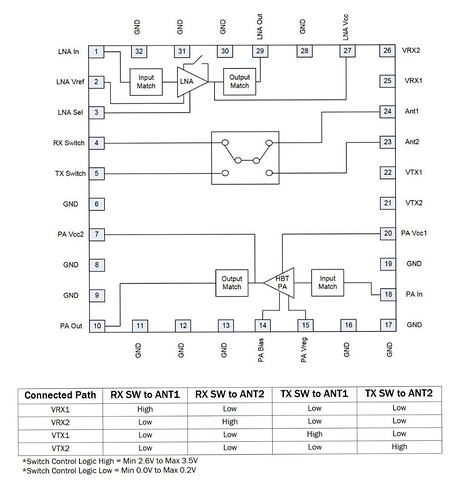 Mine came open, but I had to pry after cracking the weld, and knocked off the power switch.

dennilee,
Any further advice on opening things up?

Just to prove we put the goTenna Mesh through its paces harshly here at the UMESH Radio Lab, I managed to forget my personal unit was on top the truck - and it got hit a glancing blow in the process of hitting the pavement.

Seems to have partially cracked the weld. Is avoiding trashing the power switch mainly about staying away from it when prying or is it more complex? The reason I need to open mine is that the case distorted enough to affect operation of the Power button. I managed to tweak it enough so it now comes on and shows it’s still eager to serve, but right now I can’t rely on it being off or on.

Didn’t mean to void the warranty, but it’s hard to expect it to protect against dumb…

dennilee,
Thanks, very helpful guidance, since extra caution is always advisable around batteries for safety.

Fortunately, after your post gave me the courage I needed to take the knife out and plunge in, something miraculous happened. As I started running the Exacto blade along the part of the weld that was parted in the accident and toward the rest of the weld, an audible pop saw the seam settle in place and the Power button start functioning much like normal. It’s very sensitive to being pushed, but reacts appropriately. Before, if you touched the sundered case, it was obviously shorting or tweaking the button.

All in all, it could’ve been a lot worse, assuming this recovered functionality is retained. The buttons are scuffed, as is the front lower cover. But it works:slightly_smiling_face:

Have you seen the dog & cat modified units ?

How does that work without opposable thumbs, the primary barrier to our companion animals joining us in the mesh?..

That power switch has been giving me fits. Fiddling with it seemed to make things worse, but also brings it back to life when it’s just sitting there like a lump. Then I managed to knock i off the board entirely…

I managed to revive it by soldering some extension leads onto the thrre solder pads going to the contacts. The switch is held down by two more soldered pads that have part of the case attached to hold it down, but I think this is only RF shielding or simply to ground the switch case??? 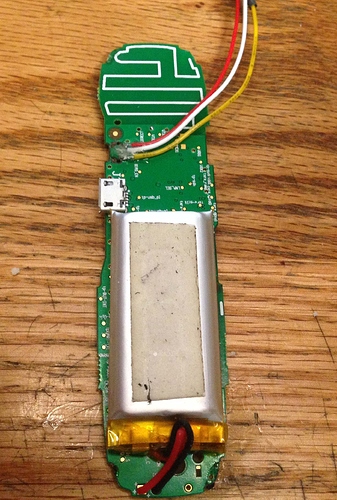 I added some epoxy to hold things together after I soldered them on. At first this worked OK, I could short the third wire to the others and it would come on, but then a second lead broke ff the switch. I can still short things and get it going, LED lights on anyway, but need to figure out what kind of switch I can use (3 contacts?, spring loaded) instead of the now deceased original?

I opened mine back up to look, but can’t really tell (or remember) anything about the switch. Seems like it was momentary SPST, but sorry, no help.

Ready to change antennas. I bought an AliExpress $1.50 patch antenna and have been waiting to test it before soldering it onto my relay unit. I have mountains to the north and the Columbia to the south, so I wanted a 180 degree radiation pattern. I wanted to test the antenna before hooking it up and my N1201 Vector Impedance Analyzer finally arrived, and the antenna looks good, 1.38 VSWR @ 913 MHz, so now it is time to solder. 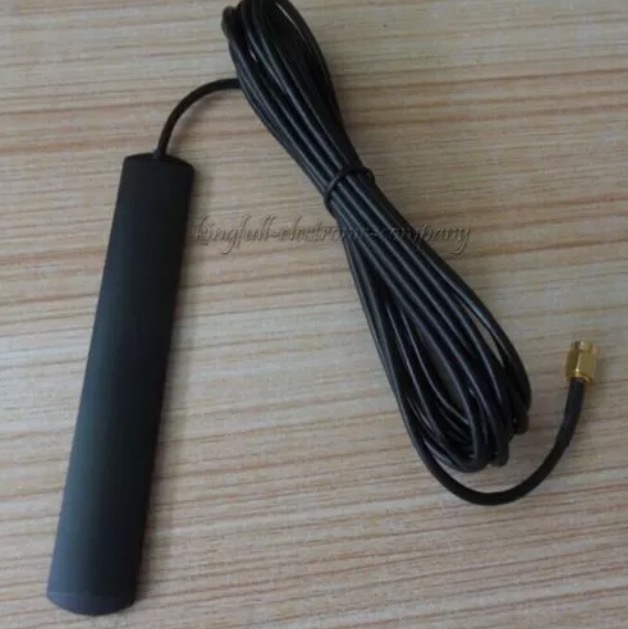 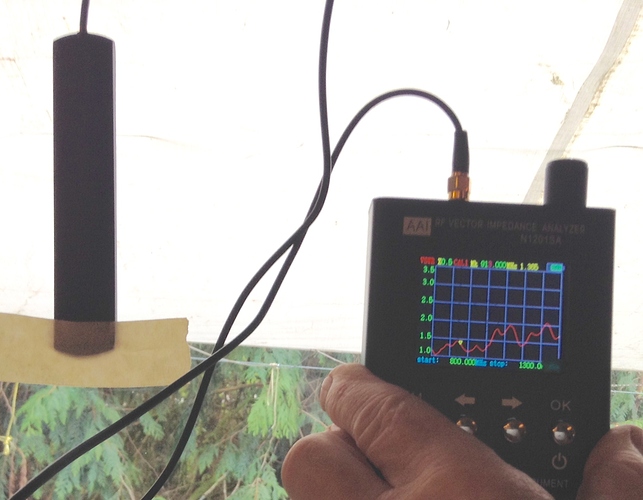 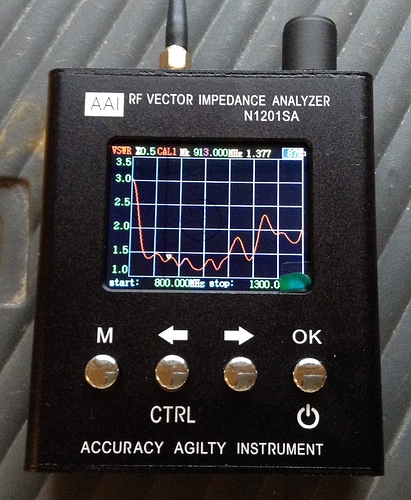 Looks good to go… Looking forward to the results!

Home is not an optimum location. But there is a cliff 5 klicks W that would be perfect for Bonneville Dam to Starvation Creek, and that section of the PCT.