Project MOAN: Mother of All Nodes

Behold MOAN: Mother of All Nodes.

In production: Project MOAN: (Mother of All Nodes) for serious NFA (Not F***ing Around) long range GoTenna Mesh hops is now if full effect!

Oh and for an antenna: An Antenex FG902 (should be be here in a few days). Yeah, I went there. 3 dBd, ultra short runs of high quality coax (LMR400) and a micro SMA connector replacing the stock antenna = Oh hell yes!

Still waiting on the antenna (duh), solar panel, panel mount connectors, and wire (electrical wiring, I got tons of feed-line). This is going online ASAP! Parts list is below. Any questions please let me know! 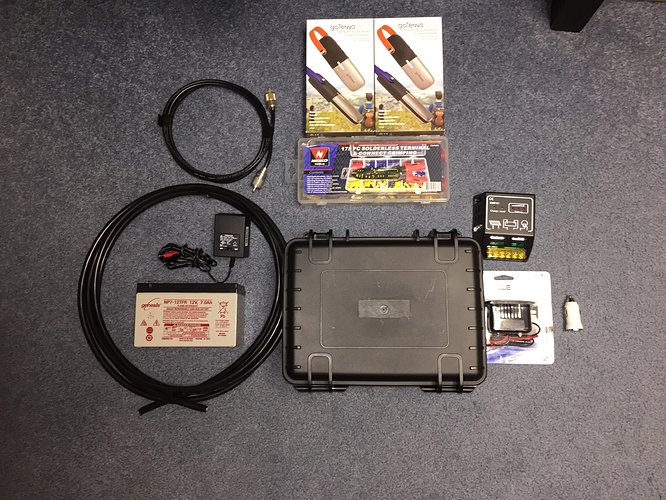 The antenna that I’ll be using:

And YES you will have to take apart a Mesh unit to solder into the antenna and I still have not figured out where the ground plane for the antenna is BUT I will soon! This is NOT a project for everyone, however I can not not do it!

Much more to come

Whoa! Where are you gonna place the MOAN and for what purpose?

On my roof for testing then on the top of a mountain, just for the purpose of making GoTenna Mesh rock! I can see myself having at least a couple of these. Also could deploy these in disasters and/or in the back country.

An onboard U.fl connector would be great for this project haha. I anticipate the first mod to my unit is an external antenna jack.

How long will the mesh run on the 7ah battery? I’m thinking about having the same setup at my downtown apartment roof, just worried about power consumption, and also heat limits.

Any plans to run it with a LNA or PA? I mean if you really aren’t effin around…

Edit: also how are you “legalizing” it? Assume the addition of an external antenna and PA puts you above the EIRP of 900MHz part 15 devices…whatever that is. You could use amateur radio, but the mesh unit isn’t amateur radio compatable due to encryption, but can that be turned off?

Double edit: checking FCC part 15.247, you’re limited to 36dBm ERP (e.g. 1W (30dBm) power plus 6dB antenna gain) so you’re fine with 3dB. But hypothetically if I was REALLY not effin around (with 1500W at my amateur radio disposal) is there any workaround?

I think the only work around would be not to tell anyone. Not like any one is going to inspect it.

It’s going to have solar also to keep the battery charged so it might run forever. As far as heat I’d paint it white for a rooftop or a tower. Any other ideas? To keep it cool?

This is a rough draft per say, just want to get it up and functional and then do some fine tuning. I am also hoping others see my project and that inspires them to build a better one than I have!

A vision without action is merely a dream. This is most def an action type of project!

My style is simple: “Get kick ass communications up first and ask questions later!”

However we could petition the FCC to make an exception in cases of places without coms or in the back country. This little device has so much damn potential it’s pretty amazing. I say we make GoTenna Mesh bigger than cable TV and/or drugs! 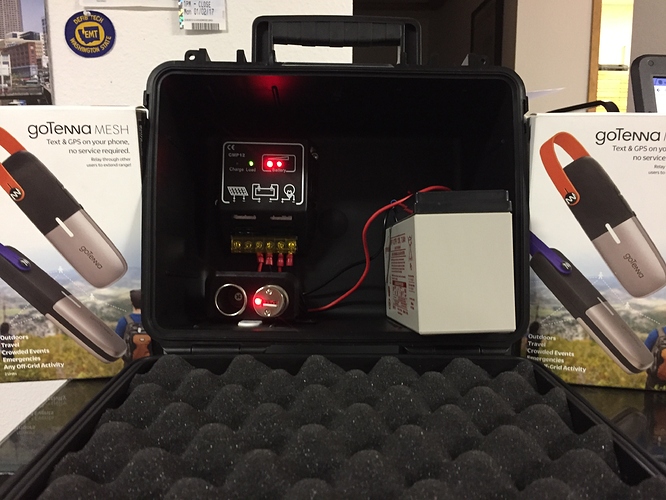 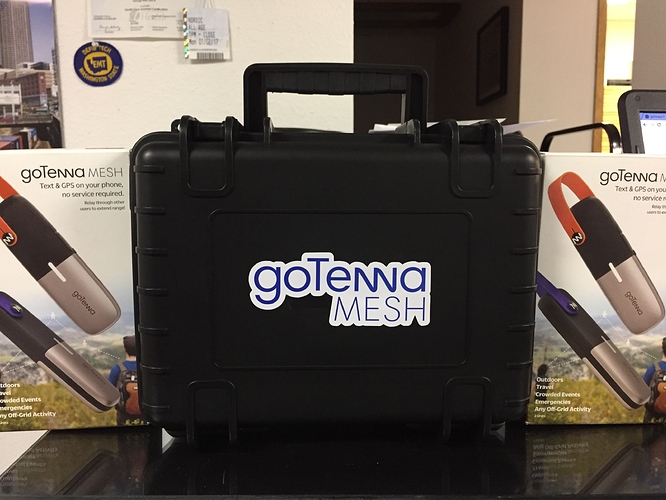 I’ve done several of these kinds of boxes for my mobile radios. For cooling, I use a 40mm case fan I think RTV siliconed to a 1.25 inch threaded pvc coupler (electric not plumbing and secured to the case with those electrical conduit rings) with a similar outlet but without the fan. A simple threaded end cap (I use plumbing versions for the cap since the threads are tapered so won’t loosen) keeps the water out when not in use. While in use, I can add elbows facing down keeping rain out. To keep bugs and dust out for 24/7 operations, I suppose you could add a thin filter of some sort. I’ve also thought about how to get heat out by conduction to avoid any open holes, but I haven’t gotten very far in thinking how to do it.

@jbowman90 awesome advice! THANK YOU SO MUCH!!!

The threaded coupler is cut down (non threaded end) to fit inside the box using a hax saw. If you then run it quickly over a belt sander, it will be very flat, and the raw PVC will take the RTV silicon very well. Need to use electrical PVC fittings to use that locking ring as plumbing PVC fittings use a tapered thread. For the cap, use a plumbing cap because it will tighten nicely. 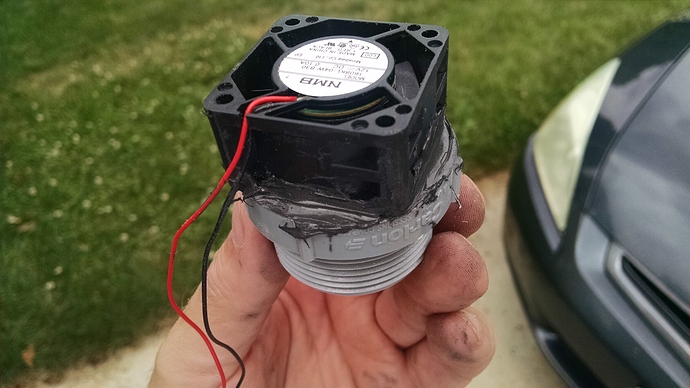 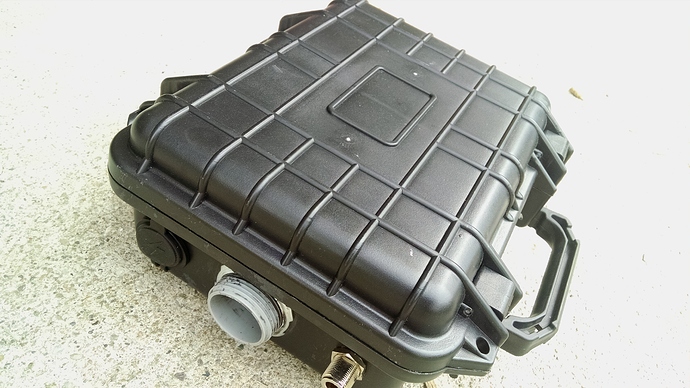 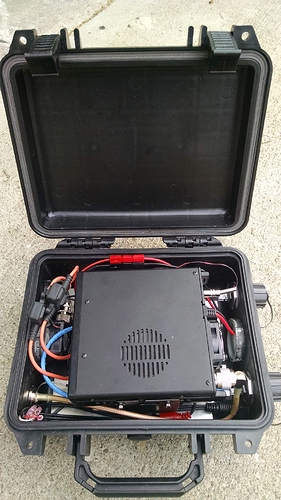 Oh that’s HOT! I am totally going to steal some of your ideas! THANK YOU FOR SHARING!

Project: MOAN is making some progress! The antenna and some other goodies got here today! 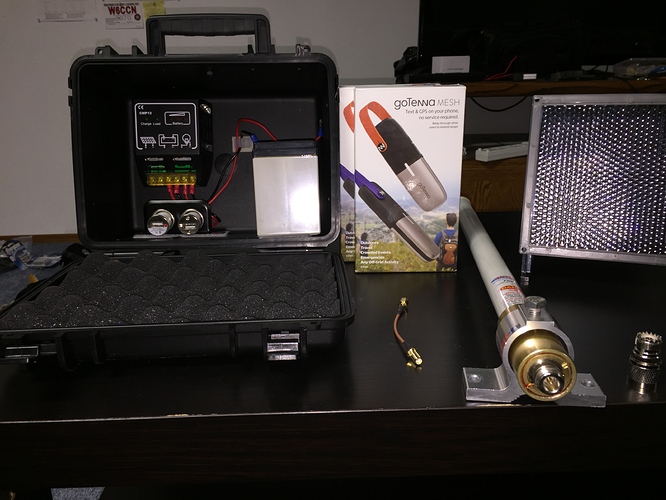 @gua742
I’ll be watching this thread closely. This is right in line with my plans for two units.
When they arrive, what advice can you give on cracking the case?

I’m only just knowledgeable enough about mesh networks to get myself into trouble. That said, shut me down if this is a stupid idea.
For a node as proposed, would it make sense and would it be possible to Not increment the hop-counter? Could a select few high-vantage nodes, with backup power and great antennas, bridge neighboring meshes without crushing our bandwidth?

I used a small hacksaw, went sslllloowwwwwwww. More to come when I get this thing done

For a node as proposed, would it make sense and would it be possible to Not increment the hop-counter? Could a select few high-vantage nodes, with backup power and great antennas, bridge neighboring meshes without crushing our bandwidth?

@Matthew_Ellisor this is quite an interesting idea. Thanks for bringing this up.
We can definitely do this. Do you have any thoughts on how we could regulate such a feature & keep our Mesh network robust?
Here are few I can think of -

I’d rather see a self-regulating structure instead of a community or manufacturer regulatory function but I’m not sure how that could work. Maybe the community version could work now but is that scalable? Perhaps we should wait on P.MOAN1.0 and go from there.

BTW, 2 antennas ordered. This is like waiting for Christmas…

Maybe the community version could work now but is that scalable?

If the community is engaged enough, scale should not be a problem.
Yeah P.MOAN and other similar projects will teach us a lot!

@Matthew_Ellisor I am getting it done as fast as I can! More to come asap!