Project MOAN: Mother of All Nodes

Thanks for all the info!

Jumpering across the capacitor with a small blob of solder is easiest for me rather than remove it and bridging the gap with solder. This is a very delicate operation. Most soldering iron tips are rather large and this presents a problem. My solution was to take a piece of thin wire, around #20 AWG, and wind it around the iron tip and have a small end that is used to be used to apply the solder blob across the top of C50 capacitor. I did use a microscope when I did mine but a jewelers loop or strong magnifier would be a great help. This may be a daunting task for some but maybe you could find someone to do it for you. Good luck and have fun. This Node concept is really cool!
Ken - W4KLP

@Ken where did you attach the coax? Did you scratch off silicon to expose the fractal closer to the capacitor?

I cut across the circuit board at the trace that runs vertical on the left as you look at the board with the fractal on top. Now the fractal is disconnected. I would cut about 1/16 inch gap. Then scrape away the green masking to expose the gold plated trace on the bottom side of the cut of the trace that goes to the capacitor and solder the center conductor to the shiny scraped area… Once that is done, solder the braid to the ground trace. It sort of circles around the outer perimeter of the board. The solder blob across the top of capacitor is the easiest for me using the modified iron tip. The ground trace has a bunch of holes drilled in it so it is easy to spot. Be careful that the braid doesn’t have any wire “whiskers” that could short something out! Once you have done all that, use a clip to hold the coax to the top of the circuit board and put some 5 min epoxy on it to secure it to the board.
It is kinda scary but just be careful and take your time. BTW I used a small diameter coax such as RG/174. Send me your address by email and I will send you a piece of Teflon jacketed coax with a SMA male on the end.

Hey y’all! MOAN update for everyone. Some important stuff here…

If you’re planning your own network you NEED to use this site! It will really help you with radio line of sight and as such with placement of units! Special thanks to @ShootAnyAngle!!!

Here is a great website for calculating and displaying line of sight signal coverage on a map view. Very useful when trying to choosing locations for placement of relay nodes: http://www.heywhatsthat.com

Seriously @ShootAnyAngle THANK YOU! I now have a legit way to test the range! This is my MOAN’s coverage area:

No problem. Glad I could help! 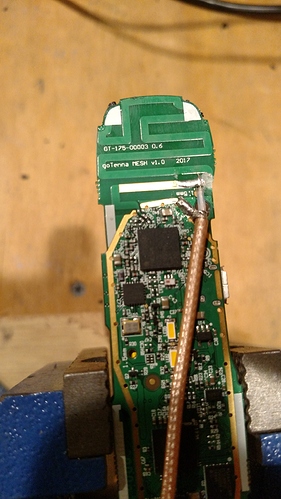 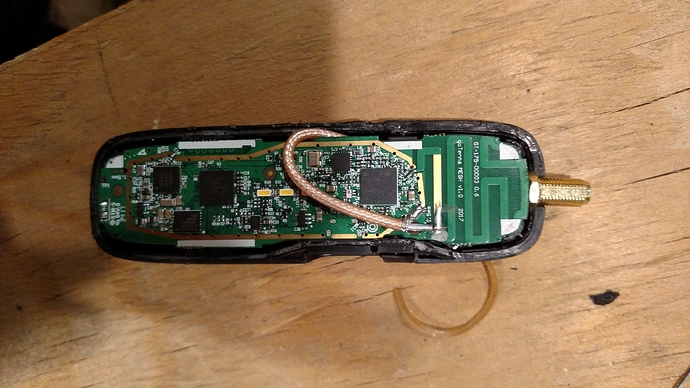 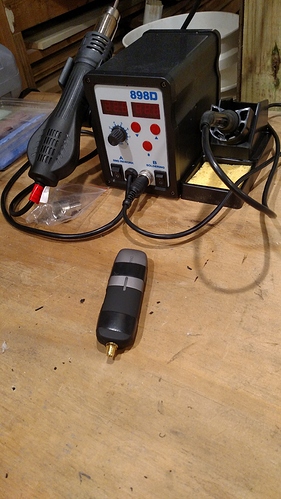 Well, after lots of reading I took a stab at this. I am very new to this, but I have my heart set on building MOAN units. I bought 6 and plan to make 4 into repeater stations. One in my girlfriends car that parks on the roof of a garage in downtown silver spring during the day, one built into my work truck, and two at residences around Silver Spring MD.

I’m taking a guess here on where to attach to the board. Im hoping that I won’t suffer too bad a loss from being further down the fractional antenna. I did this in hopes to minimize the bend radius of the coax cable. I am also unsure if I need to bridge/bypass the C50 piece or not. Hopefully someone can clear this up for me. I wanted the SMA connector to be on the body of the unit and not a whip that hangs off. It would be interesting to have a whip antenna be able to be attached to this like a ham radio. I do have a FG9023 antenna on the way, hopefully it will be here in the next two days so I can start testing this. Once I test it, I do plan to remove the electrical tape and hit it with a ultrasonic welder. I so hope this works! Any advice is appreciated!

People I have ZERO idea what any of you are talking about and yet I am so happy you are here strengthening this project and wearing awesome T shirts!
Mother of all nodes sounds AWESOME ( ok maybe o have a tiny idea what it is … like the mother of “ anything” is probably a mind blowing thing)

Love the Ts and the MOAN works

You are detuning your antennas by having them that close together. I hope that is a pvc mast or fiberglass paint pole your using. Otherwise you your SWR is probably sky high. At a minimum you will distort the antenna pattern. Brian nb9e/kaf2088

Here is the coverage area of the MOAN, just a heads up for y’all!

With year-end, the Holiday Season behind us and extreme cold warnings the norm (today, it is -22C / -8F ambient and -34C / -29F with wind chill), it is time to throw a log on the fire and get focused on the MOAN.

Thanks and congrats to all on the continued progress!

Just ordered one. Now to work on my antenna design, probably a collinear.

Good info.
"Post must be at least 20 characters."
Thanks !

Not sure why this popped up here. I as responding to the info on choosing between the PCB fractal or the MMCX (yet to be added) connector.

You should bridge the C50 capacitor. It is used to tune the fractial antenna’s reactance.

I have seen that, but I have also seen that if one uses the connector (that one must put on) there is a pin on one of the chips that will disable the fractal and activate the MMCX connector.

Correct. The antenna switcher can have 2 of it’s input pins switched and it will output the signal to the unpopulated mmcx conncector.

Thanks. I refound it It is post 129 in this thread.