@bbwr10coqsm and Mr. C have inspired me to start a pet-centric thread.

Do you have cats? Incredible! Tell us about your beasts!

Do you have a dog? Right on! Send pics.

Do you have an unconventional pet only legal in 4 states? Share IMMEDIATELY.

These are my, and my roommate’s, kittens. Meet Diane Keaton (full orange), lovingly referred to as Diane Kitten while applicable, and Linda from IT (white with orange spots)! Linda from IT handles support ticket re: trying to sit where you’re sitting, pressing arbitrary buttons on all remotes, and VPN authentication. Mesh photo shoot to come~

In another thread, you met Mr. C using his kitty app with the goTenna mesh. Mr. C was adopted after his previous human went off to college and that human’s dad asked us to give him a home. He was originally named Caesar, but that was just a bit too pretentious so I made him a commoner by renaming him, which he seemed OK with so long as it didn’t affect his very specific food ration. He doesn’t eat that canned stuff that other cats enjoy, he wanst nothing but a very specific brand of dry food. Mr. C is part-Bengal, so he acts, smells, and even has differently textured hair than many cats. Here he is hanging out in the garage on the tarp that covers our restored and modified Canadian Forces surplus M101 1/4 ton trailer.

You also met Wally tuning around in his sleep on the Panasonic RF-4900 shortwave. Wally is a real cuddler, then when he gets comfortable he starts nursing on himself! Here he is at 8 weeks old in a pic off the cat rescue site that we adopted him from. He still has that “Help me out, world” look on his face many days.

Here’s the old girl, the Queen of the Scene, Rowena. She was adopted after some friends found themselves with one too many cats after their second kid was born, so we adopted her. She can be grouchy with the guys, but is also a real sweet cat. They should just remember she’s in charge and every thing would be OK. Here’s she’s got a toy, but she really likes snakes, although it’s mostly catch and release. Just wish she wouldn’t bring them in before she does that!

Meet Mecki and Max. They are Keeshond (pronounced: Kay-Sond) originally from Northern Europe - hence their heavy, double coat. They are a non-working breed and are commonly called Velcro dogs because they LOVE to be with their humans. If you are not feeling well, they will come and sit next to you and oftentimes will physical touch, be it putting their body on your foot or leg. They are watchdogs, meaning they are very observant and have a VERY loud bark to alert you of something that is not right. I’ve heard the story more than once about how they will start barking at falling leaves.

. If there is something going on, Max, the younger on will bark, then when I get close, he will move closer to what is bothering him. I something tease him by saying " What’s wrong Lassie, is Jimmy stuck in the well?"

Posing for a family picture!

Max when he was a puppy. In my opinion, Keeshond puppies are ridiculously cute and have an uncanny resemblance to Tribbles!

It doesn’t snow or really get under 30F, but on the colder winter nights, they like to go outside and sleep in the open!

Jeff613,
Those pups are unbearably cute! Arrgh, melting my heart…

While they’re not exactly pets, they are cute, live here and I feed them – baby squirrels. Here a closeup of one a few years back, the first day out of the nest. They’re pretty well developed at this point, but just being able to see gets them out wobbling around a little too soon.

They grow more fur in the tail and elsewhere very quickly, going from clumsy to graceful in less than a week. Here’s one at about that state with its mom.

This is a pic of the current occupants of prime maternity space in the fence, a momma and her two babies, peeking out of their upper deck, making it pretty deluxe for squirrel housing.

Momma squirrel has been keeping a close eye on her twins. With good reason. i was watching the babies play a few days back discretely. Momma now allows this without hustling them inside so long as I keep my distance. She was sitting aside. I started wondering where Wally was…

All of the sudden, he jumped up on the gate from an adjacent fence on the other side you can’t see. I never had a clue he was lurking there.

Just as suddenly and with more authority, out of nowhere Momma hurled herself right at Wally as he came above the top of the fence, bouncing off him and sending him reeling back in shock, trying to find the ground as quick as he could.

Today was more sedate. I saw both babies at once, so I know everyone’s OK. They don’t always come out together, more often just one at a time with mom. I caught some pics of one climbing around as mom was grazing on peanuts above.

This afternoon I caught one of the babies grooming Momma, a nice way to thank her for being her as Mom’s Day looms. Hope your Mom’s Day is wonderful, even if only wonderful memories now.

Under no circumstances will i ever consider apologizing for this:

on the contrary, this must be celebrated! did this exist on the internet somewhere, or did you create it special?

Apparently @anon62894636 and I both have this image on our hard drives. Neither of us know where it came from. My working theory is that iCloud has become self-aware, and is trolling us, although I’m open to alternate explanations.

I’m still looking for a hi-rez version of a pic for @anon62894636 but I did come across a bunch of older pics that will come in handy here and there. Since we’re doing slightly scary pets, several of the pics were of this beauty hanging on the house, one of the larger spiders around these parts.

This one is same species, different spider.

More on the cuddly side are three cats emeritus, Kasumi (the gray), Kuro (the black), and Che (the part Siamese). Che was most famous for wandering off for six months, then showing back up one evening out of the blue while I was grilling some steaks. All have now gone to cat heaven.

Things are a little slow today, so a good time for a nap…
And a cat pic or two. That’s Mr. C on the left looking relaxed. You’ve met him earlier and he is a current inmate. His companion was named after him, being know as either Lil’C or C2, because he was a lot like Mr. C in looks and personality with some added cute. Lil C was apparently abandoned at an apartment on the other side of the block. We adopted him, but he was a bit too comfortable in the streets and met an unfortunate event. He was just the greatest and if he wasn’t so bold, he might have gotten old. He did enjoy life while he was here and we remember him fondly.

@MikeL Mr. C is basically famous. Glad to see him again-- he seems so sweet.

Diane on the other hand… he’s constantly serving me stink eye.

Ahh! Diane is so cute, even if she is a bit blinky. Orange cats really have great personality, too. I tried to dig around and find a pic of Pumpkin, my orange cat. He passed away while I was in DC doing research back around 2010 before I started using pic-hosting on-line, so no pics in handy form. Will have to do some digging and maybe scanning.

It’s Monday and we could all use a silly looking cat picture or two, this time starring Wally.

With Florence about to hit the coast of the Carolinas, thoughts are often turned toward the people evacuating. Hope they’re all safe! Often forgotten is that many of the evacuees have pets that they must care for. To raise everyone’s morale and help us remember the cats, dogs, and other pets caught up in the storm one way or another, Wally chose to pose with the cuteness turned up to Stun setting. Here he is in three pics, trying to cheer you up…

BigBrownSpiderNightVision from Mike Lehman on Vimeo.

This got me wondering…It would make for a rather cool Halloween party game to tell ghost stories using only your goTenna Meshes.

In the depths of the Midwest winter, sometimes you just want to be close to the ones you love. That goes even if they have a drinking problem, errr, it’s really more of an attempting to drink problem…

Mr. C is feeling a little under the weather and it’s not just that Polar Vortex. He somehow came down with something called a hematoma. It was a good example why you want to watch your pets and, well, pet them regularly. Maiko found an odd swelling at the inside base of his upper ear on Sunday. It was already getting larger on Monday when we took him to the vet’s and scheduled surgery for Thursday. By Wednesday night, Mr. C was really suffering as his ear swelled up like a fat tick. 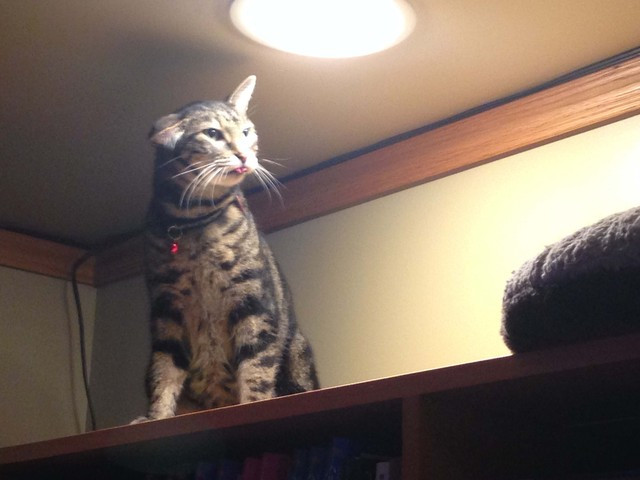 We’re not sure how it happened, as there was no signs of an injury, a common cause. Sometime high blood pressure will cause it. What happens is that the ear fills up with blood. You can’t just drain it, as it would simply refill. The vet has to sew the skin of the ear to the cartilage on the lower side. This way the ear will heal and look normally instead of turning into a “cauliflower ear” like boxer’s used to get before headgear became required.

We’ll stick to a family friendly pic here. While the ear top side isn’t pierced, it does get puckered up in the process. 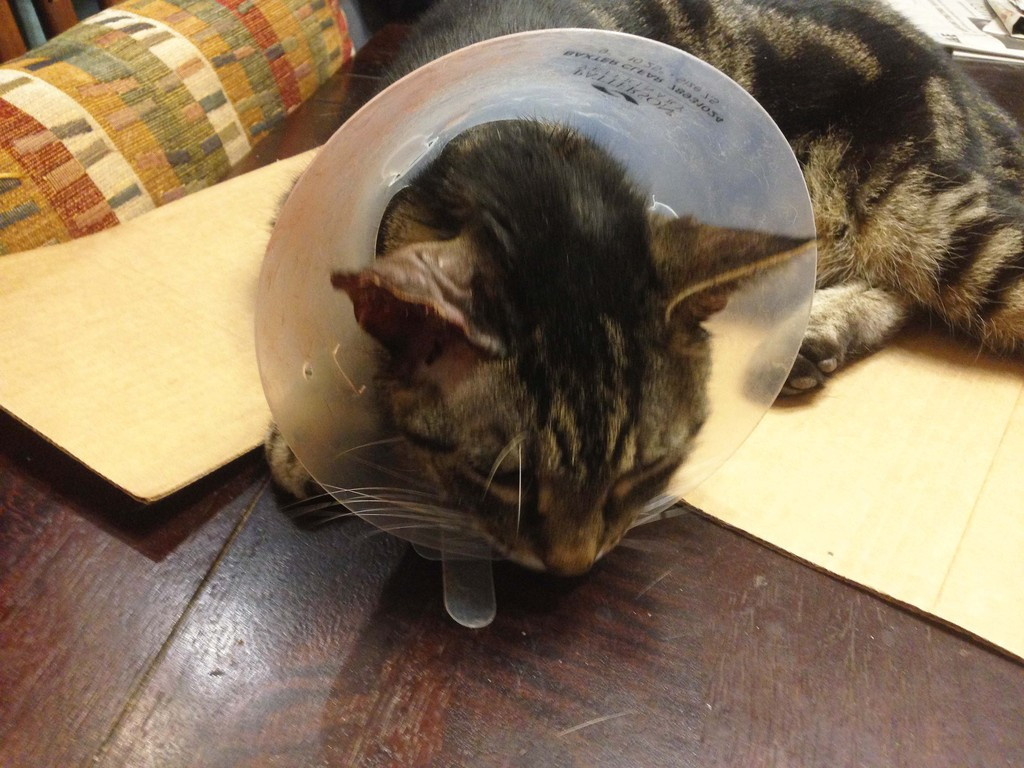 The worst part now is the collar, which he has to wear for the next 3 weeks or so. He’s doing OK, but please send any spare thoughts and good vibrations his way.

He gets lots of hugs here, especially right now, but he’s pretty bummed about that collar.