Is anyone interested in a goTenna Moto Mod, compatible with the Moto Z line of phones?

Having a goTenna Mesh built into a Moto Mod would allow single-device charging and carrying, as the Mesh unit would be connected to the phone itself (drawing power and charging from the phone). It could still act as a totally independent Mesh unit, just in a different case.

I don’t have any, just gaging interest.

DO IT! I’d love to see how this turns out/ works.

Just finished up range testing, so now seems good to reveal how this turned out.

First, the Moto MDK, Mod Development Kit. This includes a mod assembly as well as a base controller board. Inside, there is an 80-pin connector that gives access to several data buses, USB, and power. 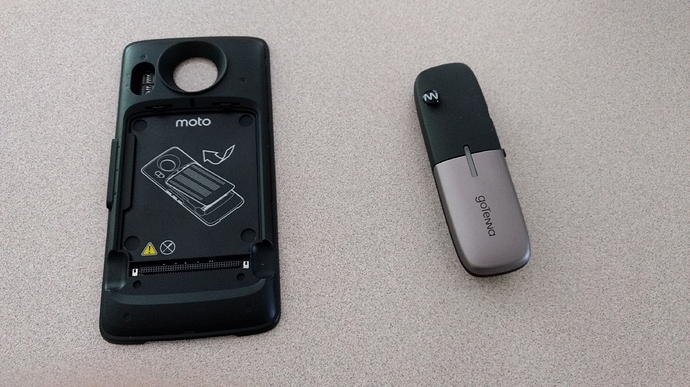 For this setup, I simply tapped regulated 5 volt power and used it to charge the goTenna through its USB connector. Since the goTenna battery wouldn’t fit, I removed it and redirected the mod’s internal battery to the goTenna. This was a double benefit as the stock developer mod tries to charge the phone when attached, and I only want the phone to charge the mod. 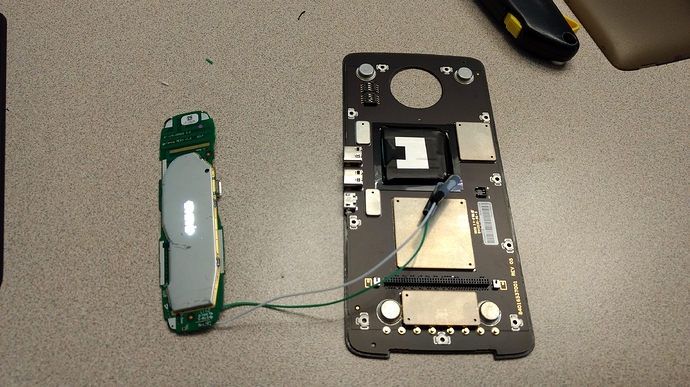 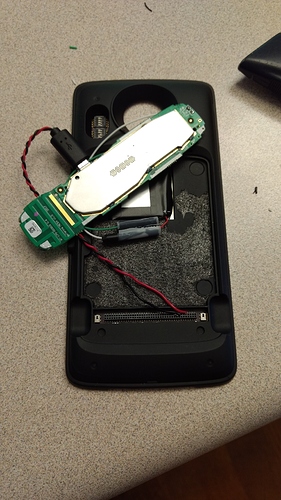 After wiring everything up and setting the goTenna in place a couple times, I was finally able to get the back cover to snap into place and start range testing. Side by side with my stock goTenna, range was almost the same, the stock unit doing a little better, which I expected. I won’t know the extent of range loss until I do real world use. 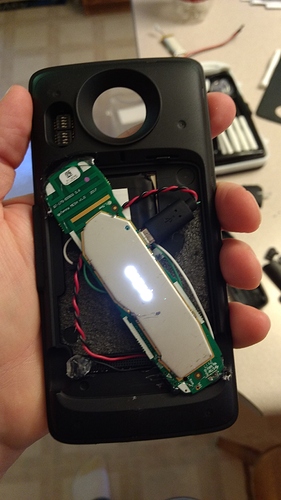 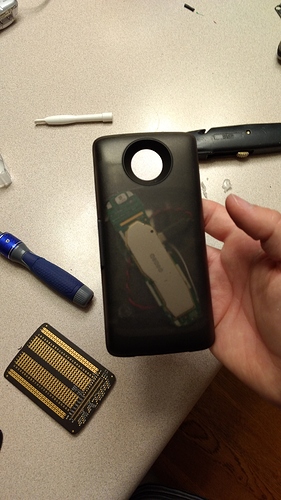 Oh, here’s what’s left of the stock goTenna case. Not an easy thing to separate. 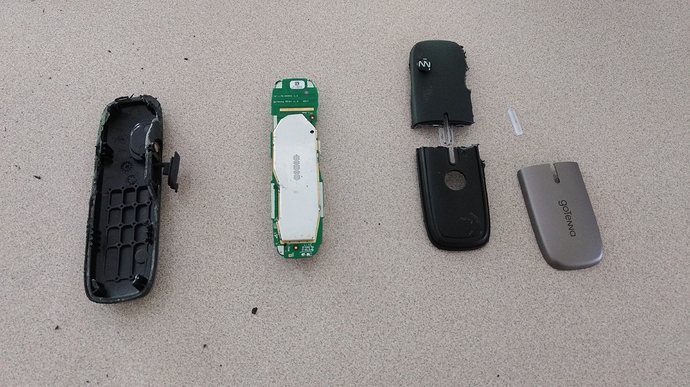 Leaving the mod attached overnight (just shy of 10 hours), my Moto Z Play lost 20% charge between regular idle loss (mobile data turned off), Bluetooth, and draw from the goTenna itself.

Next test will be how long the mod battery can run the goTenna when detached from the phone.

Good work.
Let me repost this, because the case cracking tip worked great for me. I got a very clean split.
http://www.5khz.com/2017/10/08/gotenna-mesh-teardown/ 93

This past week’s use shows that long-range coverage definitely suffers compared to a stock Mesh unit. When doing range testing with my stationary node, most of the messages that made it through had to relay through the unit hanging from the coat hook in the back of the car, even when holding the phone so the goTennaMod was looking straight at the relay. Within about 1,000 feet or so between sending and receiving units, the raw power of the radio can overcome the loss in reception.

I haven’t had a chance to do a runtime test, but it definitely won’t be near the stock 24 hour runtime. Sitting overnight pulls the mod battery below 50%, so I’d estimate between 12 and 16 hours when separated from the phone. When connected, the phone can last a little better than a day with regular use.

When range isn’t a concern though, the convenience factor is huge with having both devices (gTM and phone) in one unit.

I think this could be made better with the USB SDK available. I’m really looking forward to USB capability. I also think a better antenna could be integrated into the case. You’ve started a great project! I can’t wait to see future improvements. I could really see gotenna as a module for future phones. I don’t have a Moto mod capable phone

or I might be tinkering with a similar mod. The rest of us could however make a similar case with slightly less integration.

Agreed-- this is a really exciting project! And, the USB SDK isn’t too far away!

Resurrecting this thread. Given that there are so few other Mesh users to chat with in my area, the goTennas haven’t gotten much use after building the mod. Combine that with the fact that I quit using the Moto Z and went back to an iPhone after a several-month stint using a flip phone (yes, I 've been changing phones a lot recently), the Z has been sitting in the box for the last 6 months. Which leads to the point of this post.

Is anyone interested in buying my Moto Z Play (1st gen), the custom goTenna Mod, and projector Mod? As showcased by this thread, the Moto Z has only been used for about 3 months (bought it to do this project, but with the lack of other gTM users and the sheer size of the phone, I stopped using it). The projector is nearly brand new with maybe 2 hours of use, and the phone shows almost no signs of usage. The developer mod includes the goTenna Mesh unit, all wired in and ready to go. Snap it onto the phone, turn the Mesh unit on, pair it, and you’re good to go. Like I said previously, for short-range communication (or longer with a nearby node), the convenience of having Mesh and phone as one unit with one power connection is huge. If you have a second Mesh unit in relay mode in the car, range issues mostly go away.

If there is interest, I’ll share the link to the ad. Everything works great, I just don’t have a use for it anymore.