With the number of allowable hops poised to rise in the next couple of months, it is more likely that many of us will carry more than one Gotenna on treks into the wilderness. And it would certainly be nice to have a case for them rather than simply having them get beat up rattling around in a backpack. Are there any plans to make a protective case for extra Gotennas?

I have a suggestion on this, pending a custom made case. Something called a “tool roll” might be just what’s needed. It’s a roll up pouch with little pockets that your tools slide into, then you roll it up and tie it for safekeeping. takes up minimal space. GoTennas could fit neatly in each pocket. Carharrt offers one that looks like it will work well for about $25 list, with Amazon and others carrying it. Saw others that were similar even cheaper.

We don’t currently have plans for this but I think there’s probably several diy options that would be easier than custom cases. @bbwr10coqsm’s idea is good!

This is easy. I use the molly case that I used in the Army to carry my radio. Gotenna fits perfect. You attach to your pack using a carabiner, use the molly straps to attach directly to pack or use the belt straps. Available online from retailers that carry military surplus. Radio size I used is appx 4" x 3". Places like Sportsman Guide, etc. Cost only a few dollars.

I carry 2 in a Lowepro Phone Case 20, it attaches to my backpack with molle strap.

I can confirm that attaching goTenna Mesh to any MOLLE gear works really well. If you don’t know what that is see here: 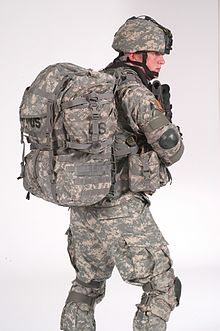 MOLLE (pronounced /ˈmɒl.liː/, similar in pronunciation to the name Molly) is an acronym for Modular Lightweight Load-carrying Equipment. It is used to define the current generation of load-bearing equipment and backpacks used by a number of NATO armed forces, especially the British Army and the United States Army. The system's modularity is derived from the use of Pouch Attachment Ladder System (PALS) webbing equipment as rows of heavy-duty nylon stitched onto the vest to allow for the attachme...

Looks all military and whatnot but lots of outdoor gear has this stuff, just walk over to your local REI or such!

I like the tool roll idea. You fit multiple Gotenna Mesh devices, as well as a powerbank to keep them all topped off while stored.

Related - Does anyone know where I can find a good solar tool roll?

Powerfilm is the brand I use with my Ham gear. The key to solar panels is surface area. I own 30watt, 60watt and 120 watt models. 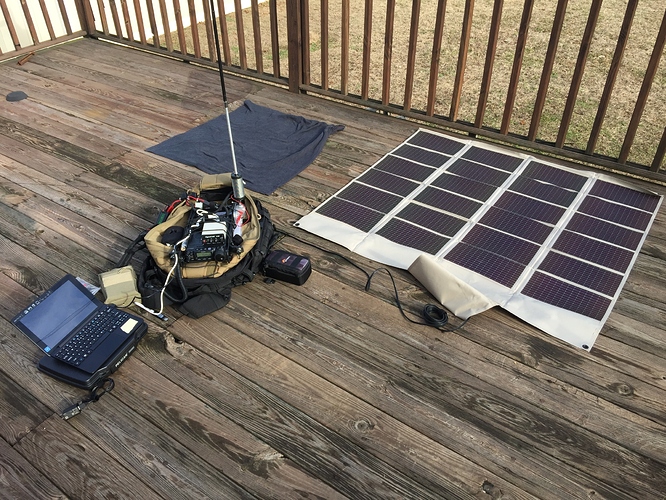 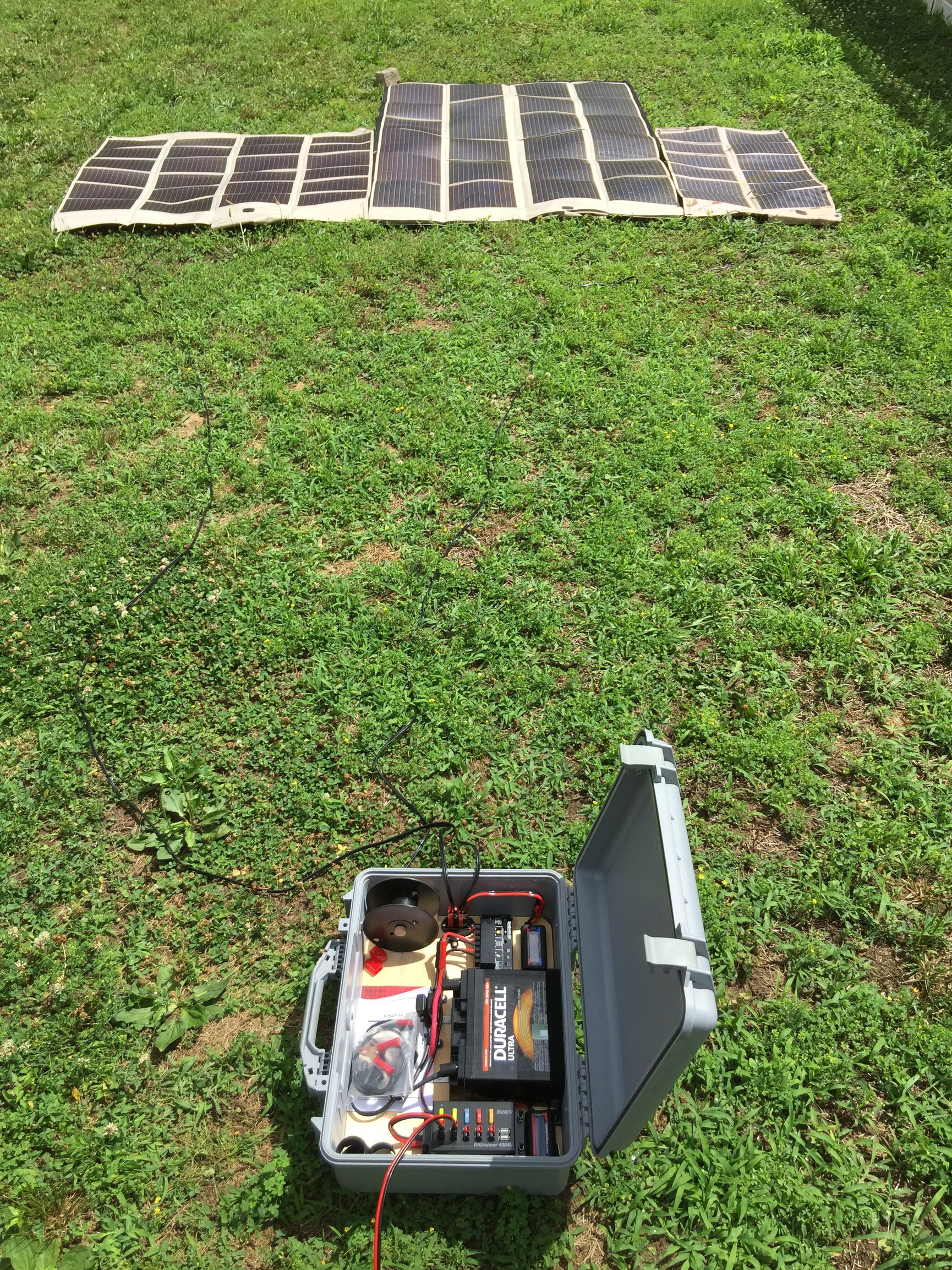 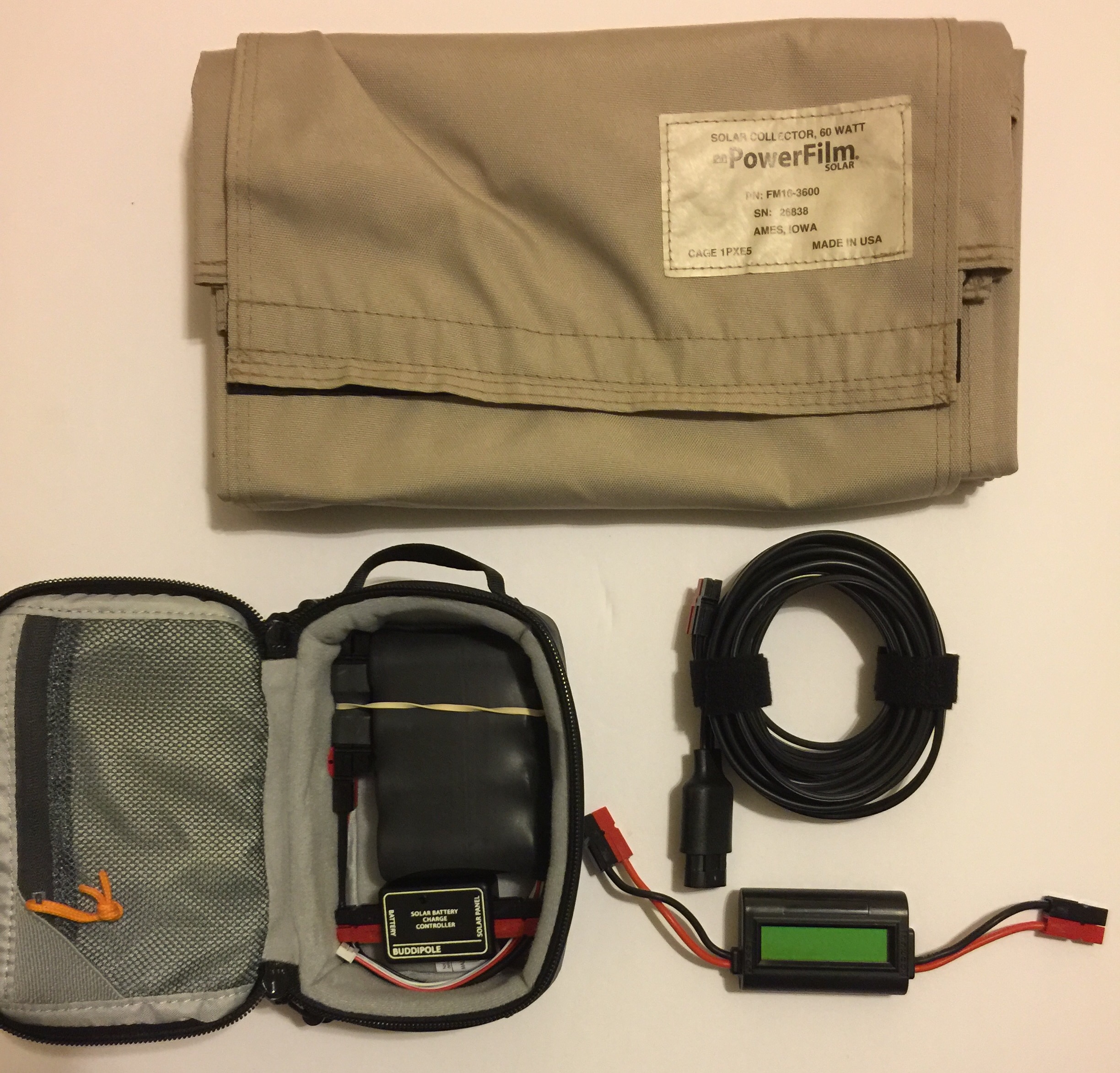 RAVPower has a 23W version up on Amazon that I used to charge up my RAVPower 20100 battery pack.

Walked into the local rural big box (Farm & Fleet) yesterday and they had a display of various Carhartt kit bags, etc right up front, including the Tool Roll I suggested earlier in this thread as suitable for hauling around goTennas. They were all 25% off, so I laid down $18 and change and walked out with one. It’s actually destined for the truck, but I thought I’d take a few pics with GTMs inside etc. 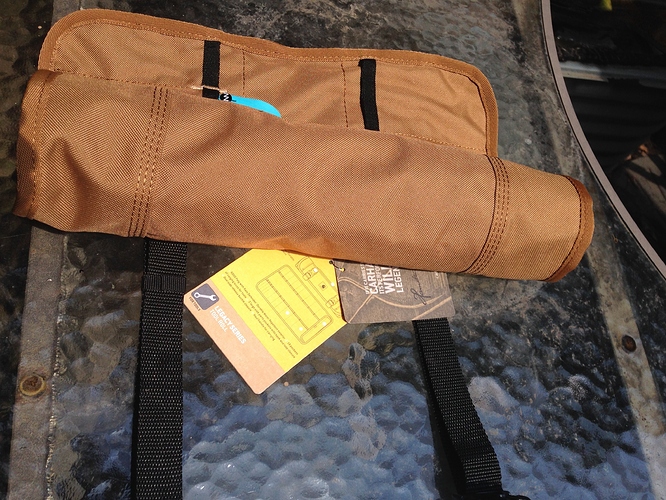 As is typical of Carhartt, the Tool Roll is made of heavy duty materials, stitched together carefully and designed to last. Mine is made of the familiar Carhartt brown fabric, but you can also get them in black. There are 18 tool pockets and a set of 3 small pockets to hold smaller items that can be secured with a flap. 17 of 18 pockets are big enough to hold at least one goTenna Meshes; about half a dozen might also be big enough to hold a cellphone-sized device, although the fit is tight in all but one or two of the larger pockets. 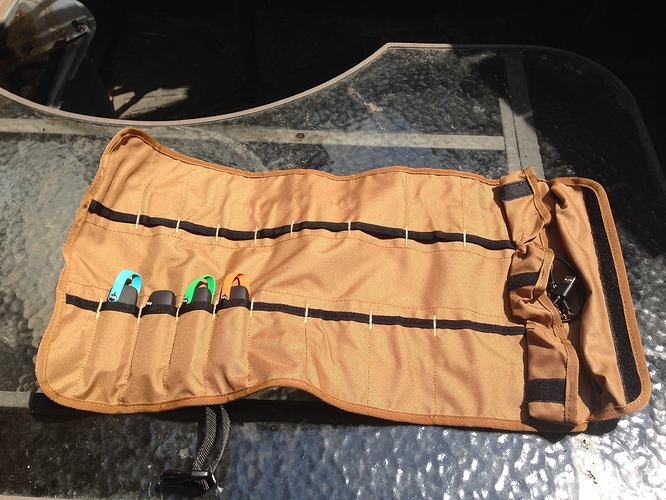 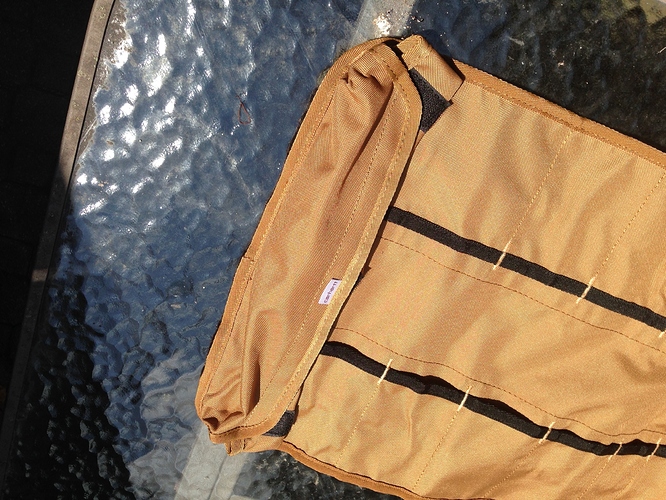 The straps to secure it are adjustable, because the more stuff in the roll, the larger diameter it is. There’s also a sturdy handle, so the whole package is neat, tidy, and secure once you close it up. 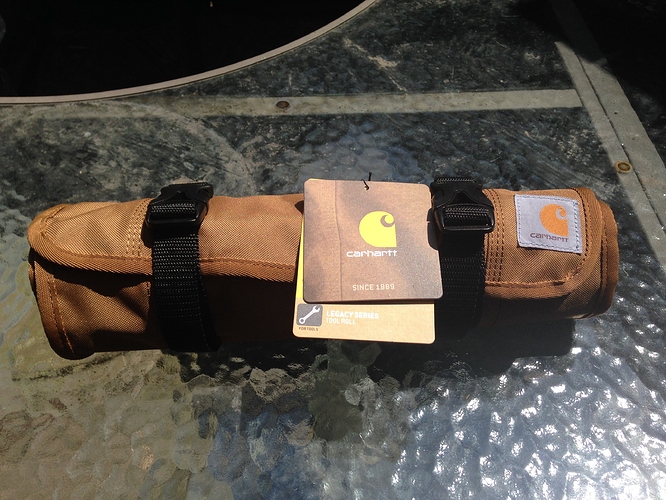 I’m using this on my main packpacks and a messenger bag. Also has enough room to attach an L-shape USB connector in case it needs a charge. The backpack in the photo always rides with me in the car. The cable goes through the little hole for the hydration pack. Since I use a water bottle, I store a flexible solar panel and at least one power bank in there. Pouch available at Amazon: http://a.co/d/a4ecmBf 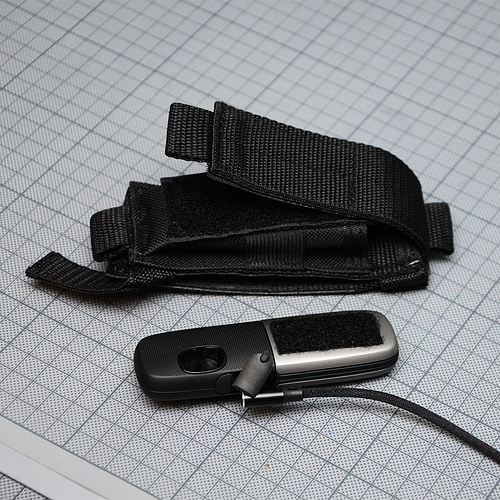 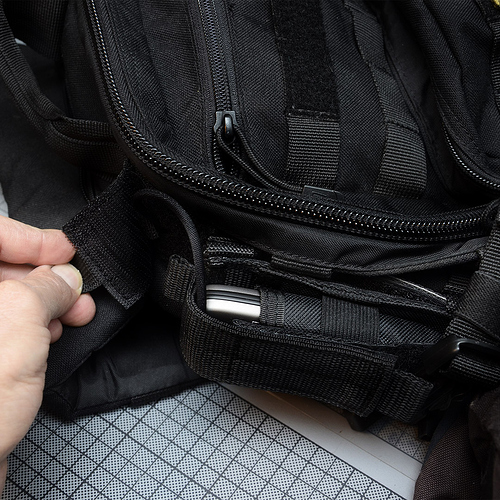 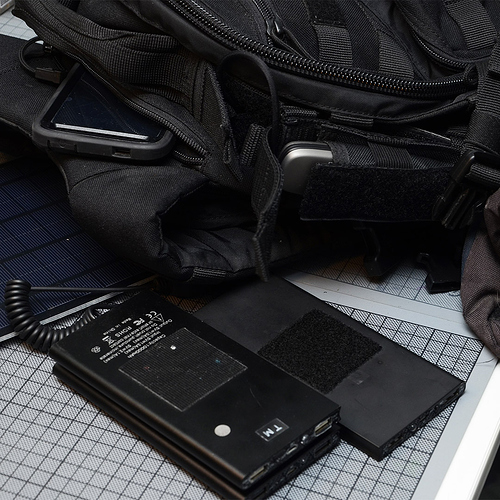