So, I haven’t received my gotennas yet (supposed to be here by 8pm today… Really wish they would ship using literally anyone else besides USPS who are super unreliable) but I am planning to set one up as a stationary node in our apartment with a solar panel for power. However, the window in our apartment faces an interior courtyard. I don’t know a lot about radio, but it seems to me like this would cover the courtyard well but probably wouldn’t be helfpul to the wider community? Just trying to find the most effective places to put my spare units to help grow the network.

A lot of it is going to depend on building materials and stuff in between. You can always range test it yourself once you get it, but it’s probably better to start with the window, unless your apartment’s non-window side is closer to open area and has less radio disruptive material going to the outside world.

It all depends on distance and line of site. I work in a large building on Sunset in Hollywood. If you look at the image below you can see that despite being on the far side of this building (all be it on the 9th floor) from 3 city blocks away the signal can penetrate the through the width of the building.

Anywhere that an additional structure gets between me and the other unit blocks the signal. So the CNN building on Sunset cuts off reception as I travel east on Sunset. Also despite the airy nature of an open parking structure on Delongpre to the south and east all the metal and concrete combined with distance also blocked the signal at that distance. 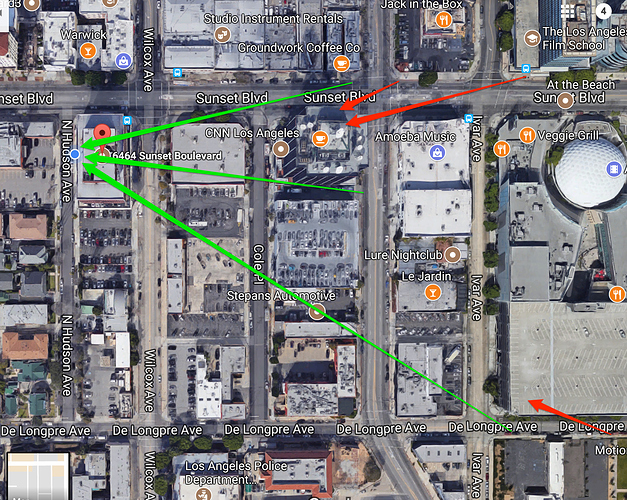 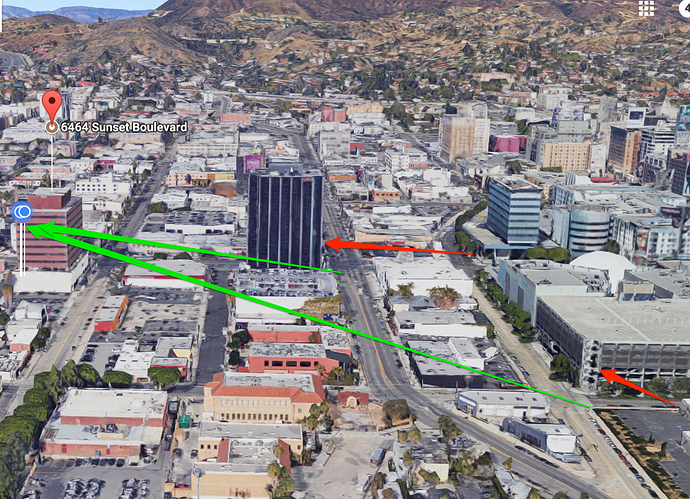 3M tint shields radio waves. If you have E-Glass (EnergyStar windows) it may be better to place it on the wall. Stay away from the studs, they could be metal too.

Talk to you’re maintenance department and ask if they have a mechanical room on the roof, or a high floor on the exterior wall. Most mx folks I’ve met have been down to earth people and are happy to help when they realize what it is and does. Here at work they are putting one in the penthouse to test coverage area.

I would like to know the true yearly consumption and use the local utility rate to figure the cost of plugging one in all year. If a 12 watt LED is on for 2 hours a day the power cost is $1.00 a year. So $20 a year should cover power and “rent” to hang the node? Some guys will accept payment in the form of a case of beer.