@Firqby shouts are currently the easiest way to verify that your relay units are functional.

shouts are currently the easiest way to verify that your relay units are functional.

Hate to say this but Shouts no longer show any indication on my unit in Relay mode.

Check out my video of my attempt

Also while I get all the other features of the new firmware, what I was more specifically asking is what is the gain of Relay Mode vs just an unpaired unit?

Seems to me that at least an unpaired unit can be checked later to see what shouts it may have caught in its buffer while you were away.

At this point, Relay mode is more of a black hole that turns the GoTenna into a semi-decorative conversation item that when powered is a silently passive relay node.

I think those of us putting an $80 investment to use for ourselves and others would at least like to get some sense it is doing some good or at least can be confirmed to still doing its job.

@Firqby thanks for bringing this to my attention. It looks like we turned off the LED for shouts when the device is in Relay mode. We will change this via a future FW update.

Relay mode, turns OFF bluetooth to conserve power and assigns a new Random ID to the device.
With a new random ID, you never have to worry about the relay unit receiving and storing messages meant for your phone.

This is a cool idea. We will look into implementing something similar in the future.

But then there’s no way to ping it and to make sure you can actually see or communicate with the relay node?

This is why I suggested this. (More details of operation in the link)
http://community.gotennamesh.com/t/stationary-relay-node-update-suggestion/1005

How will you connect the antenna?

Maybe I am overlooking something. I’m trying to place one of my Gotenna units in new relay mode. After pressing the power button three times (unpaid unit) the lights continue to flash in pair more. What am I missing? The device in ON and not paired to phone. Thanks

EDIT: Yes I have the new app update installed on phone.
EDIT2: I overlooked after updating the gotenna app via the app store, you have to update the unit also via gotenna app settings/about- there you will see firmware update available for your gotenna device.

I was able to test the new Relay mode.

I like the LED being off in relay mode. Most of my devices have electrical tape over the LEDs. They are way too bright. Use one in a dark room and you’ll understand.

I just got a 4 pack of gtmesh, and am using one in always on relay mode. I was not able to get it into relay mode until I paired it. I setup this unit using the power button triple push x2. Then I unpaired the relay unit in the sw, brought up the one I will be using for my cell phone and paired that one. Don’t know if that is how you are supposed to do it, but if I turned on a new unit, the triple button pushing did not seem to work out of the box. The updated firmware did not seem to affect the not going into relay mode, the pairing first did.

@firebasecody ‘Relay Mode’ requires FW v0.13.46 or above. Very likely that the unit you tried to place in Relay Mode had a FW version lower than 0.13.46
If your device has the latest FW, you do not have to pair it to a phone to place it in relay mode.

That makes sense. The first thing I did when I paired it was to upgrade the
firmware.

Tony, I’m getting closer to placing some nodes. I was looking at the Voltaic 3.5 watt panel and was wondering how it’s been working.

did we ever get clarification on the newest FW if it it will power back up to last know state after the battery dies?

@Idaho_Fluke goTenna Mesh does not support this yet. We hope to add this feature in the near future.

Everything that I have read seems to indicate that it is NOT possible to monitor the battery level of a device that has been put into “relay mode”. Is that correct? Or, am I missing something.

Correct.
You will have to exit relay mode (power cycle) and then pair the unit to a phone to monitor battery level. 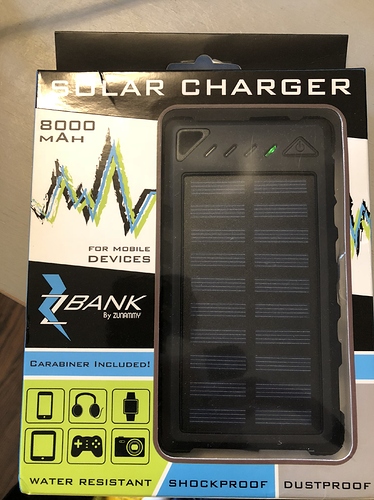 I purchased 2 of these the other day with the hope that they would be the beginning of my stationary relay node journey. I have a couple of questions:

Do these have too much power?
Being battery packs with integrated solar will they automatically power off after they fully recharged?

I, obviously, want to set up the least maintenance relay node I can for the reasons being I want to put them at the highest point I can which is not on my property so do not want to have to come to power them on every week or more.

What is the cheapest and most maintenance free example anyone has to date if my newly acquired solar battery packs won’t do the trick? Thanks!

With goTenna Mesh, the feature that makes or breaks solar packs is an always-on feature. When a Mesh unit is fully charged, its power draw drops and tends to cause external battery packs to turn off their USB output.

Voltaic’s V15 and V44 packs are preferred because they have an always-on mode and recover themselves if they go dead (meaning that even through a dead battery, the external packs re-enable their output once they receive input from solar or another source).