Although full Gotenna Mesh units can be (and are) certainly used as relay nodes, it would be advantagous in many ways to have Gotenna units that are used strictly for this purpose. For instance, portable relay units could be made that are smaller, lighter, simpler, cheaper, and perhaps less conspicuous than full Gotennas. These could be used for breadcrumbing along trails while hiking or for the creation of relatively short range ad-hoc networks in remote areas. And because they could be sold for less than full Gotennas, more could be purchases for the same cost, resulting in more robust coverage.

In addition, permanently mounted units could be made for more permanent stationary relays. These units could have features that allow them to be better suited for this purpose such as a connection for an external antenna, weatherproof case for permanent outdoor mounting, and ability to use multiple power sources. Such a unit would allow people to have a stationary relay without tying up their portable units. And with the ability to use a higher gain external antenna without modification, range (and therefore coverage) would be better. How about it?

I don’t think they can make a user replaceable antenna in this spectrum but I see no reason why they couldn’t make a unit with a better antenna. They made some compromises on the antenna to make the overall package user friendly. That made lot’s of sense for the regular Mesh units. For a stationary unit I agree that device should look much different. I’m not so sure it would bring the cost down. I don’t see where they will be able to cut costs by that much. Larger production runs could cut cost but that won’t come from diversity.

I’m not sure if you know but they are making non consumer devices that you should have a look at. Perhaps a relay only mesh might look more like one of those.

The real interesting part will be if Gotenna starts licensing the Aspen Grove protocol to other device makers. I have heard @danielagotenna say they are not a hardware company so I imagine that is the direction they want to go.

We do plan on making base stations in the future; since they wouldn’t have to be as small/convenient to have on a person — a consideration when designing goTenna Mesh — we will have less constraints on size/weight and whatnot. It’s definitely in our product pipeline but not spec’d out or committed to quite yet, as we want to make improvements & enhancements to goTenna Mesh first, and also get more of them out there in people’s hands (after all, we barely started shipping a few months ago!) so we make sure we design accessory products (like a base station) with as much user feedback data as possible. In meantime we definitely want to build as much new functionality into goTenna Mesh as a lightweight base station! After all new hardware takes quite some time!

The real interesting part will be if Gotenna starts licensing the Aspen Grove protocol to other device makers. I have heard @danielagotenna say they are not a hardware company so I imagine that is the direction they want to go.

I definitely do see us as a protocol company (more on that here in this TechCrunch article) and want to see the core of our technology — our mesh protocol — embedded into anything/everything that can find utility for it at-scale. Licensing the protocol itself and figuring out how we might open-source different parts of our technology (while maintaining a business) is also on my strategic roadmap, but as with my reply above… more to come before we get there, including advancing the protocol further so it can work stably on nonproprietary hardware and, frankly, can simply do more things than it does today! Big improvements coming already early next year (hint: more hops)!

I think it would be perfectly legal for gotenna to have an external antenna. If Sonnet can do it on the 900mhz ISM band then why not gotenna?

Here is the link: https://www.indiegogo.com/projects/sonnet-most-advanced-wireless-mesh-network-communication#/

Scroll about halfway down and you will see this: “In addition, Sonnet comes with a SMA connector, so you can connect your own directional antenna to increase the point-to-point range even further!”

I would like to see SMA antenna connectors on all gotenna devices. Not just base stations.

I think it would be perfectly legal for gotenna to have an external antenna. If Sonnet can do it on the 900mhz ISM band then why not gotenna?

You are probably right. I’m no lawyer and as complex as the FCC rules are even the FCC doesn’t always apply them correctly. I know even less about the laws Gotenna is trying to comply with in all the other countries they seek approval in.

I’ve been thinking on possible designs for dedicated relay-only units. With the testing I’ve done with my units, it appears that range is better towards the front of the goTenna than from the back. With the LED lights facing north, the range to the south suffered compared to when the LEDs were facing south. I would imagine range off to the sides of the device is even worse (although, overall, still impressive for what these devices are).

With even-coverage, power, and temperature range in mind, the design that I think would work best is having an external antenna out of the top of the unit, replacing the strap with a rear-mounted pole bracket, replacing the internal battery with a capacitor (to handle brief power cuts and transmissions), and replacing the side-mounted USB port with a bottom-mounted, weatherproof DC jack. If anyone is familiar with Ubiquiti Networks’ equipment, I’m picturing something very similar to the PicoStation, which is roughly the size of goTenna V1: 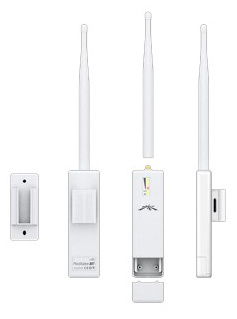 For power input, have an internal, wide-range input DC circuit that can take anywhere from 3.5-30 volts DC, allowing for a wide range of external battery packs to power the relay. Replacing the internal battery with a capacitor would also eliminate most of the temperature concerns by allowing the battery pack to be stored in a better location. I would also say to remove the power button and simply have the device power up whenever power is present.

Interesting design, good ideas. However, the antenna must be integral to the unit and non-removable to keep the FCC happy.

Even a non-removable external antenna is no good? Then how does Wi-Fi equipment get around that? Most of Ubiquiti’s products as well as higher end routers and access points all have changeable antennas.

External is OK. Think of all those FRS units. Just can’t be removable, because the antenna is one way they ensure that ERP is within the Part 15 limits. They don’t want the user to be able to easily substitute something with more gain.

Edit: Well, bad metaphor sorta, FRS is Part 95, but I think the same rule applies to the goTenna Mesh as Part 15. Someone more knowledgeable will help me out if I’ve got it twisted up.

OK, that’s what I thought. I think it would be better to have an omni-directional external antenna vs. the current PCB trace antenna with the radio transmit power reduced. That ought to improve range, as well as making the Mesh unit more energy efficient (less radio power, more antenna gain), while keeping EIRP the same.

For what it is worth, I would buy and install a stationary relay at my house. Ideally, it would have a detached, all weather antenna suitable for permanent outdoor placement.

Excuse my radio ignorance, I’m days into having anything to do with radios.
I’ve seen people hardware modding goTennas, but instead of doing that, is it feasible to build a high power dumb repeater that rebroadcasts everything it receives?
I’m just thinking a radio equivalent of an inline coax booster really. Sit the goTenna next to it? This is probably a stupid idea…

Should have googled, such a thing already exists

I’m not absolutely sure yet of the problem or the solution, but I’ve been having a weird power problem in recent days with many of my rooftop-located stationary nodes. In the winter, low solar input can lead to loss of power and the goTenna needing to be rebooted via button pressing. I’ll find them down, turned off, but with the solar panel keeping it fully charged.

Now I’m finding down nodes that seem to have never been turned off. They’ve reverted to what would be paired operation, if only they were paired. They’re not acting as relays any longer, but give the single flash of standard user ops being on when queried by a single brief power button push. That’s weird too, as they should still relay even if not set as a stationary relay.

I suspect a power problem of some sort, perhaps caused by the battery getting too hot. I’ve seen the battery cited as the source of the 140 degree F maximum operating temperature. That’s very little wiggle room above the potential high temp a typical rooftop node might experience.

I want to eventually monitor the temps inside a roof-top node to get better data. This may not be the cause of my current power issues, but it did pop up as daytime temps turned solidly to the 90s locally.

What battery chemistries meet the needs served by LiPos in the GTM but are less heat sensitive? They can be larger than current batteries, as I do not need to fit them back into the original cases, but they shouldn’t be huge, either. I think something that could operate up to the range of 180 to 200 degrees could work well, if it exists at a favorable price.

I’ve also had some weird events with one of my relay nodes. I’ve set it up for relay mode (3 blinks to confirm). it’s been on my desk for months, and I check it every few weeks. once it was powered off, and another time maybe twice it was in single blink mode. (as opposed to 3 blink mode when I do the power button test) This node is in a cool clean environment and plugged in 100% of the time. 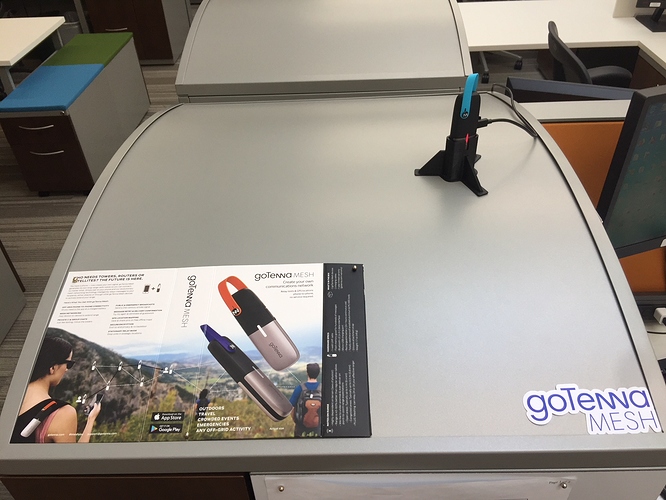 Hey guys! Thanks for calling this out. Heres a fun fact (depending on your definition of fun). If your GTM in relay mode exhibits a different LED flash than the triple blink you’re used to, they’re still in relay mode.

We’re diving more into this currently, but what you need to know is: When the device is set in relay mode, we have nice UI functionality that shows the triple flash as the relay mode confirmation. After some time, you might see one blink instead of 3. Because the device isn’t paired (and associated with a GID) and was set in relay mode, it will continue to pass message despite not displaying the pretty triple confirmation flash.

And yes, we’re working on a fix for this!

If your GTM in relay mode exhibits a different LED flash than the triple blink you’re used to, they’re still in relay mode.

I’m not objecting to this, but as I related, I’m not entirely sure all this behavior has a single source. Some of the nodes where this came up post mortem definitely seemed dead at the time. However, others seemed, well, undead (zombie nodes, anyone?) and I suspected were passing messages. It’s hard to tell sometimes with no direct feed back from the node available.

This is an area where improvements in the GUI that allow stationary node vital signs to be monitored are much anticipated here.

I agree! It would certainly be easier to tell (without direct testing) that your relay was still hopping messages.