After installing version 4.1 and updating the new firmware on 3 mesh units, I followed the instruction to convert one unit to a stationary node following the “relay mode” instructions.

I am uncertain what the new “relay mode” is accomplishing verses just setting the node as “unpaired”? You still can not ping the unit or confirm that it is functional unless you send a Shout. Unless I am totally missing something, it seems faster to just unpair a unit.

It would be nice to add a function where the “administrator” of the stationary node can established a separate GID or a subset of the phone’s mesh GID, so that the node can be pinged while still connected to the phone mesh unit .

Relay mode turns off the LED, turns off Bluetooth, and picks a random GID. It appears to be primarily for battery saving but also keeps you from needing to place a piece of electrical tape over the LED which a lot of people previously did to stop the annoying blinking.

I don’t think it matters when you unpair since relay mode turns the mesh devices Bluetooth off.

i like the new relay mode, in the recent firmware upgrade, because it responds with a simple human interface that it’s good being a dedicated mesh relay.

Also it will not store messages.

Also it will not store messages.

I forgot about that. Presumably if you could figure out the relays GID you could address a message to it and those would be stored.

Thank you…My observations were based on completing the firmware update and then immediately going into the “relay mode” without first turning off the node. This is why the node battery disconnect image was still displayed.

Now the “relay mode” feature makes sense. Activating “relay mode” after turning on the node will immediately stop the Bluetooth LED from blinking. This is much better than the need for electrical tape.

However if the node is permanently connected to a power supply, the red LED light will still come on when the node begins recharging, which occurs when the battery reaches about 94%.

So I’m experiencing something strange. My solar powered relay nodes start blinking the white LED long after being put in relay mode.

I have the latest firmware and they are definitely in relay mode.

@ShootAnyAngle strange. I will try to reproduce this. We have solar powered units at goTenna HQ. I havent seen this issue yet.

I hope this fits with this topic to save starting another thread.

We just set up our extra goTenna so that it shows as a “stationary relay” on the local imeshyou map. I see now that we’re the only one in town, although there are about half a dozen other nodes on the map. They are all listed as “area nodes” including one we were eventually hoping might connect us to friends nearby who are beyond the range of a single hop.

Are the two, stationary relays and area nodes, functionally equivalent, i.e. will both forward messages onward?

What are the basic differences in capabilities between the two? 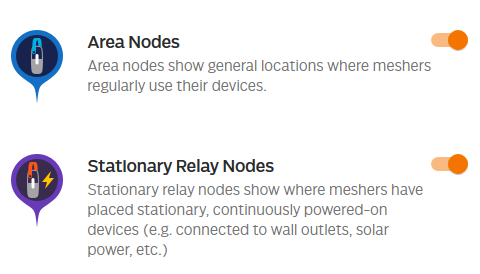 Rahul,
Thanks, that is very clear.

Now my next step may be to try to encourage “more power to the nodes!” At least now I know there’s a potential stationary relay node hiding inside every area node.

So why should I put a untit in “Relay Mode”?
I am confused, doesnt every unit “mesh” with other devices?
If so will it continue to do so even then the smartphone is disconnected?

The main advantage of putting a unit in relay mode is that bluetooth will be turned off, which will save power. If your power source is an external battery and/or a solar panel, this is useful.
However, by doing so, you loose the ability to check the status of your node (either by pinging it, or by pairing to check battery level).

When the GTM arrives factory fresh, it is an unpaired node. It is NOT in relay mode and is NOT assigned to a particular device for control and reading.

When you pair the GTM, it acts as the radio for your cell or other SMS device. Pairing and unpairing is done from “My Account & Services” under Settings. Select you choice, either Unpair if the phone is already paired or Pair if it is not yet paired. The unit may act to forward messages from other GTMs, but this is not as reliable as a dedicated relay due to the low height above ground level of most users in this mode (unless you spend a lot of time practicing parkour among the rooftops.)

When you put it in relay mode, it acts only to forward the messages from GTM’s acting as radios for individual devices. To initiate relay mode, you should Unpair under Settings first (if the radio has been paired already.) Then you use the directions under “Relay Mode” to set it to relay. If it was never paired or not currently paired, then you can proceed directly to putting it in Relay mode. So it may take adjusting in two different places to properly enter Relay mode, depending on the status of the GTM.

You can unpair the GTM from a device, but that doesn’t put it in relay mode, instead making it available to be set as either paired or as a relay.

Note that the algorithm or meshing protocol tries to contact the GTM you are addressing directly first before it will go through a relay, i.e. you won’t see it “hop” unless it needs to in order to connect.

Ideally, the relay node is placed at a high point in the area it needs to serve. This both allows it to better “see” signals from GTM units in the area and gives it a good view of other relay nodes it may communicate with to extend the range of the mesh network.

Thanks for the explanation.

I have placed one unit on a repeater site overooking the valley. Problem is that it doesn’t seem to be working. Either bcause something went wrong with the “mode” the GTM is in or it run out of power because of a problem with the wiring to the power supply.

Being set in repeater mode and therwith unpaired there is no way of checking its status without climbing up the tower. Still leaving us guessing weather its working ot not.

When I send two other Mesh units into the field how can they tell weather they are connecting directly or trough the “Relay”?

Yeah, there’s limited ways to get feedback on whether it’s working or not. You need a third unit and it should be somewhere ont he opposite side of the relay from you. Send it a message and most likely it will go through the node. At the bottom of the received message it will tell you if it arrived via 1 or 2 nodes. If there is no such message, then it arrived directly. The sending unit tries to go direct first before sending through the relay, so if the distance isn’t great enough torequire the relay, you may see nothing except the message that’s received.

I think ists something they should add to the UI so the user has some idea who he/she is connected to others.

Yes, this has been a subject of considerable discussion in a number of threads. From what I understand he main issue is Bluetooth and its power demands. Not an issue for the user, because they’ll likely be charging the GTM when they charge their cell/device. A relay will more typically reside for longer periods of time and since a cell is not paired with it, what’s to prompt recharge by the user? Nothing until someone notices it’s not working unless some other provision for power is made.

I’m not a software engineer, so don’t know how big a hurdle this is, but they were hopeful for a solution to this issue. Whether it can be applied to the current generation of features may be the sticking point.

You can add features, but eventually you add enough features or want to add a feature that makes enough demands it requires a more major update than the current generation of UTM can accommodate and poof you’re into considering a new model – with potential incompatibilities with the last generation. With this already having happened with the first gen goTennas, you want this to happen only when the new generation is clearly superior to the old school product in the eyes of consumers. The ability to mesh was that clear superiority, so that’s a pretty good explanation for why the jump was made to the GTMesh.

People do wonder about this, as the example of it coming up in the Virgin Islands discussion a few days back showed. There were questions about whether the fellow’s old GTs, still working with each other, could do texting with the new GTM’s, but if you want the cool new features they come connected to a different package of software now that is not backwards compatible, then you have to make the decision to upgrade.

Feature creep is a good thing in terms of meeting consumer needs and they seem very focused on meeting the needs of consumers at goTenna. Fortunately, the software seems both robust and flexible as they are able to get it do do new tricks and solve old problems. We’ll just have to be patient until this gets figured out and use workarounds.

The “Is it powered?” issue is probably the most frustrating problem. On my home stationary node, I house it in a transparent box. I can see the red LEDs come on when it charges and see the white ones flash when the node is forwarding a message.

As for the “Is it in relay mode?” question, I mentioned earlier my last minute habit of pressing the Power button once to verify it was in Relay mode by seeing the 3 flashes it should show as in Relay mode before allowing it up the tower to go in service.

After that, it’s a matter of getting two GTMs located far enough apart to need the relay to hook up. If they’re able to reach one another without it, then the relay can seem unnecessary. When it seems like there should be meshing and it doesn’t happen and you’re still not able to get through, it can be frustrating. But it’s usually the case that things are working and it often resolves to you’re thinking you have line of sight when there’s actually enough of an obstruction to prevent reception or the distance is just too great under the circumstances.

What I’ve found best is to get closer and practice at shorter distances. It builds confidence to get consistent reception. Then as you expand the range you’re working at and find yourself missing a connection, it will likely be more apparent what could stand change in order to capture the signal.

Thanks for your extensive anwer

Since power is not a problem on this location I might as well leave it paired with one of my devices. So I can alway’s return and check the status and directly from the unit if needed.

As for development, frankly I think they use this consumer device to fund their Pro line. Witch does have many of the features that we are looking for…

@RogerOrange @bbwr10coqsm thanks for sharing your thoughts.
To make it easier to manage relay nodes, we are planning to add a Relay Device management UI within the app. This will allow you to pair multiple devices with your phone, set devices to relay mode, ping relay devices using your primary device, update relay device FW when connected via BTLE etc.

Things operate pretty well now, but the limited feedback the user receives currently about relay nodes makes them a bit mysterious. This suite of features will really help!