Yes, I’m a HAM, so I recognize the issue with having support for an external SMA connector on the non-Pro models.

However, could you integrate what most cell phone manufacturers do and use a standard U.FL SMD surface mount connector on the circuit board to connect to the body antenna? That way, if the antenna body or wire needs replacement, at least we could detach and re-attach it without de-soldering everything.

If it’s used to simply connect the existing body antenna to the main circuit, it shouldn’t be an FCC violation.

The units are really cheap in the normal manufacturing volumes:
https://www.sparkfun.com/products/9144

This would be a huge improvement! For those of us who like tinkering,

I doubt they will want to make that kind of change. The antenna appears to be printed on the circuit board. Lots of work and cost to change that. It probably won’t be legal either unless you still had to take the device apart to change it. Can’t be “user upgradable” I bet.

I had some really crude ideas. Here are a couple. I also thought we might be able to create some kind of wave guide. None of these would be legal due to ERP per se. I don’t think the yagi design would work with straight elements. The reflector in particular but you should get the general idea.
EDIT: I am assuming we are the units ground in standard operation. Similar to a handheld transceiver of most other types. Someone correct me if they know differently.

Actually according to the v1.0 build of the circuit, there was already space for an MMCX on the back-side where the antenna zig-zag was placed. 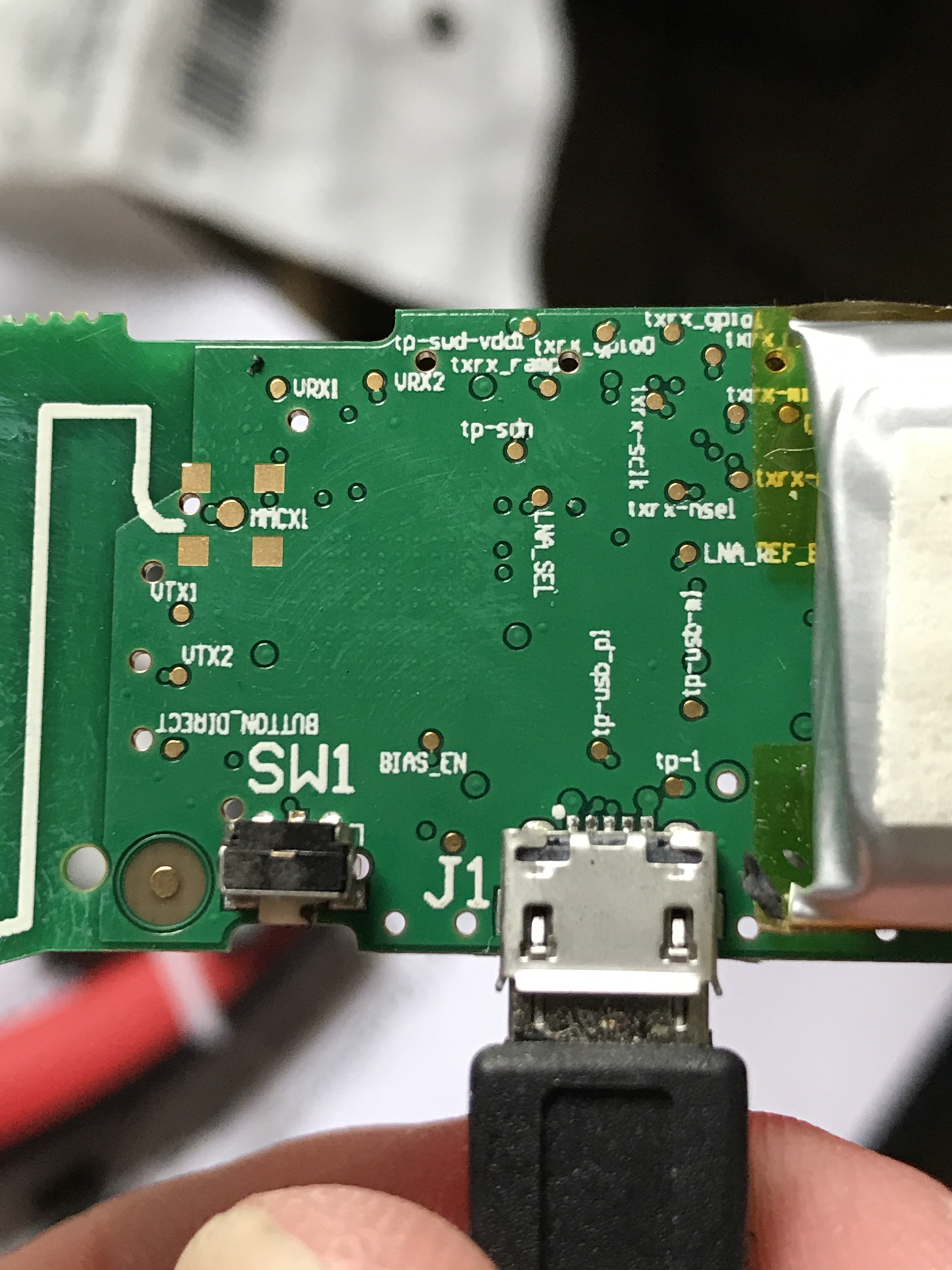 Haven’t popped a new one to see what’s changed yet, but this isn’t as drastic as the MOAN discussion.

I had to pick my jaw up off the floor!

This is more about field-maintainability, and options.

I found another pic of the circuit board and that one looks like it’s set up the same way too. I have no immediate plans to open up mine just yet. I would like backup units before I do that. It looks like they might have planned that for future use or scrapped the idea altogether. It might not be as big a problem as I thought from the cost side. I wonder if that pad is active?

I need to take some more time to go through everything now that summer weather is coming to a close in my neck of the woods. I’m spending as much free time outside as I can before it gets too cold. I really want to dig into the SDK. It’s going to take me a few long nights to get up to speed with this.

EDIT: I did a little more reading. It seems the pad is activated in software. That’s interesting.

I’ve been thinking about you’re no mod yagi idea! I just can’t bring myself to crack these things open.

The absolutely cheapest way I could think to make this is to get some Luan plywood (super cheap) and rip it as wide as the elements and as long as the boom length needs to be and use solid bare copper wire as the elements. I found " goTenna Mesh will transmit at 1 W on 902-928 MHz in the United States" but need scan the channels to pinpoint the exact freq. (assuming they don’t shift).

From my limited FPV experience, shooting for the center of the 33 centemeter band works well for single digit freq changes. So shoot for 916 if the there no single channel…

Now to calculate the element lengths and spacing.

I think the Gotenna frequency hops. The Antenna inside it is fractal so I would imagine we need to make the yagi fractal as well. There’s a company that has fractal yagi modeling software but it looks to me like the dish idea might be the simplest solution. I think that’s the one I would consider first.

Tried the dish way ptp worked for me. One with dish other one without. Through trees 3.69 miles and both units where in my house, it didn’t work in the same place without the dish. The one mesh hop was that antenna.

That’s cool! I’m glad someone tried it. I’d love to see a picture. The dishes from DirecTv and Dish Network aren’t the optimal size but I think those should give some gain. I think the ideal dish is a little bigger in diameter.

The dish I have is a wifi grid dish for 2.4ghz. I can take a picture when I get home. I tried this before I even seen this thread. I’m currently down state.

That’s one of the types of dishes I was looking at for this purpose. There is a larger round dish I have had my eye on as well but it’s more expensive and for many cases the one you have should do the trick.

For point to point I figure you could put a similar setup on both ends and connect towns. Then have a Gotenna in each town with a more omni directional foot print.

A used dish a great buy. They never go bad unless physically damaged. I’ve seen dishes like yours for as little as $25 at the Dayton hamvention

I’ll have to measure it I believe it’s about a yard stick long (36 inches) I couldn’t reply back with walz04736 my email deleted the verify account email. And I can’t get meshcommunity to send me another one.

My question to all of you. Has anyone tried the old (1990’s era) cell phone booster/extender bidirectional amps? They had them in 902-928mhz analog. They had and antenna for inside a car or building which would pick up a signal and boosted that signal to an antenna on the roof.

I haven’t tried it, but would not be FCC approved, plus where would you find substantial numbers of them to utilize, even assuming that it could boost the digital spread-spectrum signal from the goTenna Mesh?

Availability is very low. Was a thought for a possible quick way to get up and running during an emergency. Did not know if it would work or if anyone tried.