June 15 is National Nature Photography Day. I’m making this thread for people to post their original photos, favorite nature photos taken by anyone, or stories about nature photography.

I’ll start: I found this sort of incredible story about nature photography (well, space photography, but space is part of nature) and thought some of you might enjoy it.

Basically, NASA’s early photos of the moon that we are familiar with from history textbooks were much higher resolution than anyone let on. Apparently the government was concerned that the (high) resolution of our satellite images should not become public knowledge – it was the Cold War after all.

That link is absolutely worth checking out if you are interested in photography, space exploration, science, or old-school technology. 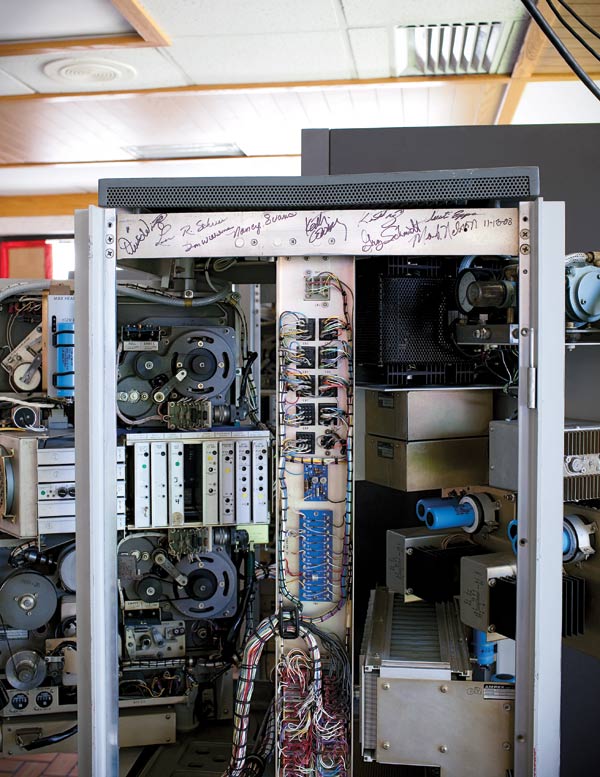 Yes, very interesting article and a later twist on a story I know more from its front end. One of the significant characters involved in developing this literally “out of this world” technology was Edwin Land. He was an inventive character, most widely known as the inventor of the Polaroid instant camera.

Behind the scenes, Land served on a committee tasked by Dwight Eisenhower with creating the means to monitor the then little known, but much feared Soviet Union. It recommended developing what became the U-2, but doing that as an interim step toward satellites once it became possible to reliably launch to Earth orbit. The Moon was a step beyond, but by then getting there and getting the images back was the main problem, not getting the pictures.

Recent years have seen many of these troves of Cold War secrecy revealed. They offer significant insights into global environmental change during the era since the end of WWII.

In my own research on nuclear intelligence and fallout, I found a non-imaging but nonetheless interesting collection of media that has served other purposes than the grim one that caused it to come into being. These systems tracked and located infrasound from high altitude events to track Soviet nuclear tests that might be conducted there in hopes of concealing them or, later, for possible violations of arms control treaties.

What these recordings showed was a planet under bombardment, fortunately mostly “small” stuff. This led to significant new insights into how the planet might have been exposed to cross-pollination with life from Mars and beyond. Probably not as compelling as images of the moon and other aspects of nature we hope will be posted here, but it was your tax dollars at work that brought us this wondrous stuff, so might as well enjoy it.

Turning back earthward, here’s am image of mine. I worked in security at the Summer Camp 2017 music festival in Chillicothe, Illinois at Three Sisters Park. This view looks roughly east and a little north. The Illinois River is not too far beyond the distant tree line and the main road at the edge of the venue. Right now, nature dominates with an awesome display of clouds, but a few hardy souls are lining up to get to the gates already, soon to fill the whole area before you with their rides. 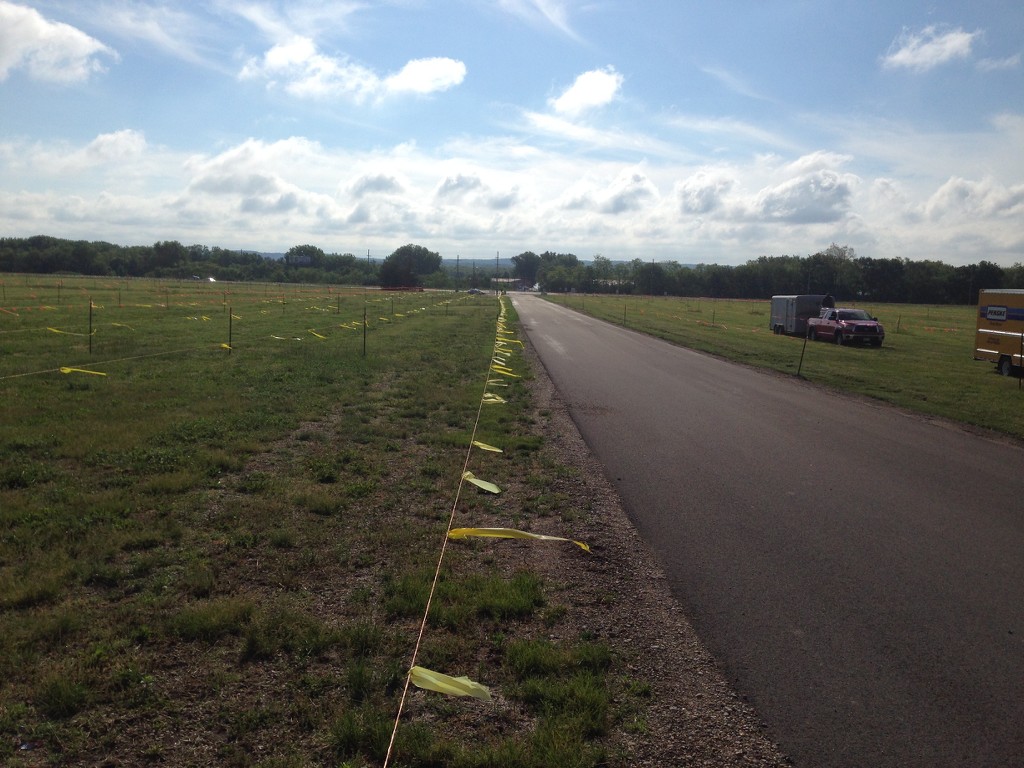 I’ll admit it can be a boring view at times in Illinois. I like mountains. But at times you can’t help but be overcome by the vastness before you here on the prairie.

A day or so later, I actually saw a wizard (or someone dressed like a wizard) flip out and go howling down this road to a somewhat indistinct fate at the highway. He returned the next day, having shed his demons, but looking for his tall, conical hat. He’d thrown it in the air along with much else of his ensemble during his ragged and hasty exit. I saw the wind catch it and blow it under a car…sorry, but even wizards can’t control the winds.

BTW, events like this are ideal opportunities to use goTenna Mesh to keep in touch. I used an internet hotspot to get a wifi signal to do email. I often had trouble getting through and I know the typical cellphone experience was fawgeddaboutit. With the mostly flat terrain (the venues and much camping was on slightly higher ground just behind the camera location here) and a few relays in the trees, the whole area could easily be meshed. Maybe I’ll return in 2019?

This first one is by my wife, taken on her most recent trip to Japan. It’s a view from a bridge crosing some tidal flats, taken out the window of the Shinkansen enroute to Kyoto from Tokyo. The sky is a bit leaden, but the drama of imagining all that is close-by in view completely underwater roughly twice a day adds a tension to what seems to be a rather benign scene. 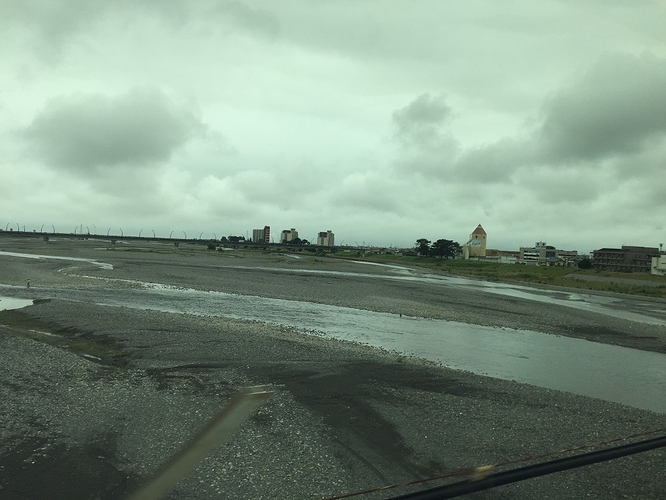 This time, the pic is near water again. This one is up on the U.P. in Michigan at Pictured Rocks National Lakeshore. 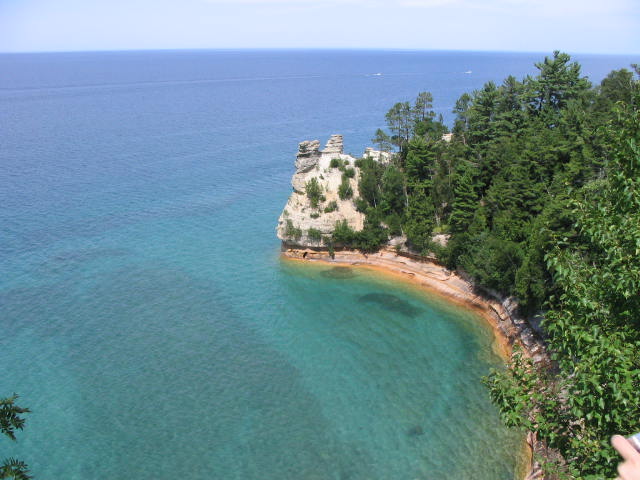 Canada is off somewhere north of that hazy horizon across chilly Lake Superior. Awesome beachcombing and views.

An add-on. I didn’t think these quite fit in the mesh pets thread, but they do make pretty god nature pics. But I have sort of a snake sanctuary here. I avoid hurting them by mowing in a certain pattern designed to get them to safety. I provide habitat that is suitable. I don’t try to drive them out, despite snakes being listed a “vermin” under city ordinance. AFAIK, they’re endangered species, so act accordingly.

Here’s a nice cozy, sunny brushpile to spend the afternoon cuddling with your besties. 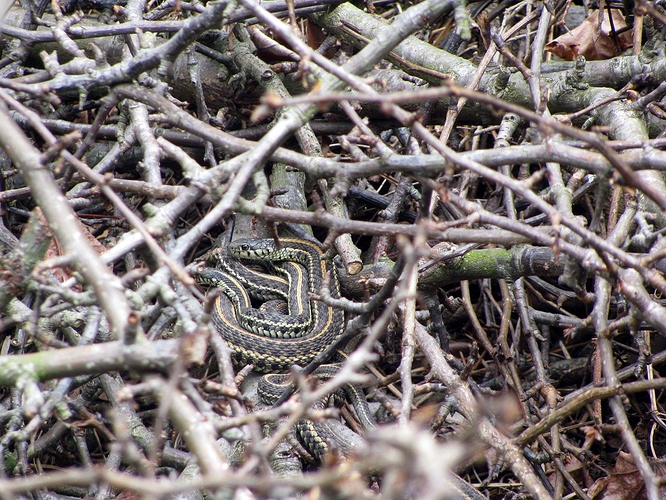 These are Plains garter snakes, fortunately only modestly endangered because they are adaptable.

Then there are these snakes elsewhere in, let’s just say, Champaign County. Illinois reportedly has only one poisonous snake other than a few that may lurk in the swamps of southern Illinois, the much endangered Mississauga rattlesnake. Right now I can’t recall whether this is my pic or my friend’s pic, wh helps protect their habitat. We were walking and talking one day a few years back and I ended up with a couple of not really great pics. He says these are Mississaugas, although there exists a similar looking snake that is often confused with it. I did not ask to see their papers… 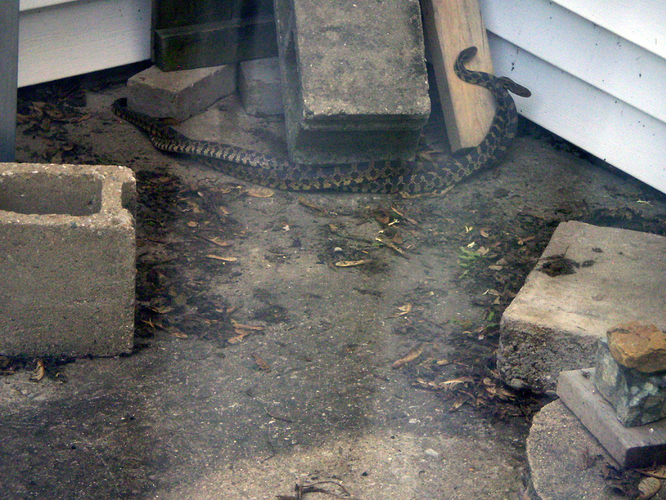