My wife and I did a Viking cruise to Cuba last week. I knew that connectivity would be spotty and so it seemed like a natural test of our gotenna mesh units. I also took along a Delorme inReach (now Garmin) satellite text device for long range communications.

We used them all the time from the point the tender landed at Cienfuegos, on the bus trip to/from Havana, and during our walking tours. We had very little free time, so we tended to split up when there was a line or a difference in interest level.

For example, there was a huge line to change money at the port. One of us stood in line, the other ferried bags to the bus and other stuff. We exchanged questions about how much money to get, status of the line movement and other info.

We used them in the big Centro indoor arts/crafts market in Havana as we split up to shop.

Because it was hard to hear at times, we would type in times to be back to the buses and other logistics so both people had them.

We even used them in the bus when we were decided (discreetly) how much to tip our amazing tour guide Rigoberto Mali Rodriguez (recommended and on linked-in).

Battery life was no problem. For three days of travel, we had no battery issues. I topped them up at the hotel at the halfway point reflexively, but they would have been fine. We still had two bars out of three.

The only disappointment was that I never got a response to a shout or saw a relay take place. We must have been the only folks with the units in our group.

Fun! Send photos of Cuba. I was last in Havana two years ago with no service and v1 goTenna 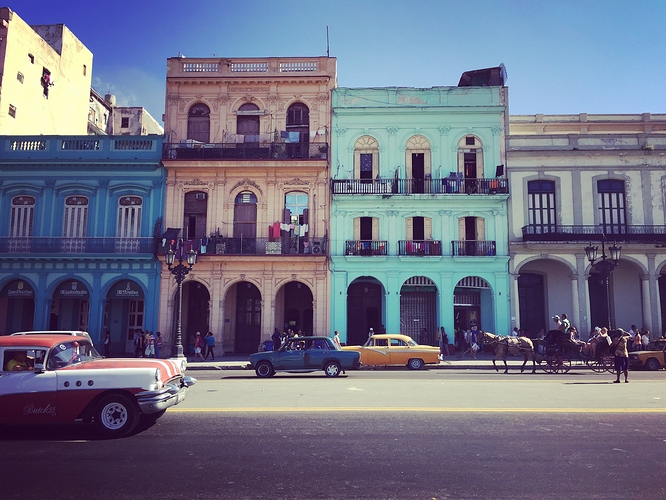 I’m almost hoping to lose cell service so I can use my Gotennas instead of just testing them. Good to hear some real world reports.

Used them in June 18, no replies to a shout but worked. Didn’t really use that much because mostly stayed together. Nice to have as security backup though!
However they didn’t work between the room (even in the window facing a courtyard with view to the sky - in the Old Town) and outdoors. Walls might be too thick in some of the older houses.

Haven’t been to Cuba yet, but there is a lot of reinforced concrete in hotels in general, perhaps even more in areas that were influenced by Cold War era building practices. I’m a little surprised you had no luck getting out when positioned in the window of your lodging. Was the (attempted) receiver in line of sight from the window? If not, whatever may have still been shielding the signal from getting out from any direction except looking directly out.

No, it was an open window facing a central interior courtyard and on third floor of four story, so definitely not direct line of sight to outside. I’d have to have hidden it maybe in a planter in the roof for it to work. I haven’t used the GoTenna enough to know its idiosyncrasies. It did work as I walked down the stairs of the building but quit once outside at various distances (1 block up to 4-5 blocks)

I’d have to have hidden it maybe in a planter in the roof for it to work.

Now, that could make for an interesting plot. Tourist drops goTenna in planter, where 20 years ago that might be considered espionage, nowadays it’s simply one more odd tourist habit…

I haven’t used the GoTenna enough to know its idiosyncrasies.

This might fall into another area of advice. Rather than discussing specific situations, it’s sometimes important to review the basics or just get some practice sending signals successfully. Once you get some experience with successfully communicating under different circumstances, the comfort level grows with each success.

I used GoTenna Mesh in Havana, Cuba last month (April 2019). It worked flawlessly. We never had an issue and allowed our group of 6 to communicate with one another. No battery issues as well. At times, we separated and we were several streets apart and it worked well. If one person stopped at a souvenir shop and the others walked along. We were able to send our location and where we were.

I also used it in Varadero at a resort. This worked well too. Two rooms were next to each other the other was on the other end of the hotel with a big atrium in between. I was able to text through GoTenna and find out where they were. I also used it on the resort to text for drinks, food orders, etc.

Overall, it was perfect for our little vacation. There was one point where we went to the bank and was trying to exchange currency, while the other group members was in a plaza probably .25 to .5 miles away. Worked well. I even liked seeing if the message was delivered. Best way to communicate without having to actually call someone.