Lot’s of talk about adding antennas to the Gotenna Mesh but has anyone thought about extending the Bluetooth LE?

It might make more sense then you think. A point to point Bluetooth connection might be the solutions to things like Firmware updates. I have been pondering this for a long while. I have been thinking about different solutions.

The pringle can style antenna might be the most compact that gives reasonable gain AND since WiFi and Bluetooth use the same frequency range there is no need to redesign the wheel. Currently we have no way to put the relay into discovery mode without physical access which is a hole in my idea unless we had an always paired device located nearby. 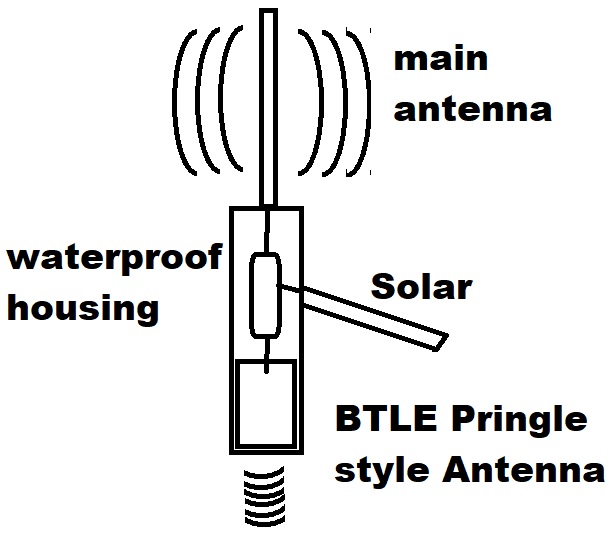 Is Bluetooth LE (or any Bluetooth) capable of dealing with 2 linked devices or is it strictly one-on-one? Can a device do both regular Bluetooth and BLE simultaneously?

What I’ve been thinking of is a way to easily link and unlink to a unit in relay mode. Specifically, I would like the ability to use Shout via a single relay, i.e. about halfway between the way Shout operates now and the way Emergency Shout operates. In essence, I’d like the capability to use this selectable feature to act as a virtual coax to a virtual enhanced antenna, a height-advantaged relay node.

This would allow a user to place a relay node at an advantageous height to usually operate as a stationary relay, but to also take advantage of this placement to gain optimal height to use Shout more advantageously by having it act optionally as it it were a well-placed antenna for the user’s goTenna Mesh. It would NOT mesh with other nodes unless Emergency Shout was enabled, but because of the advantage of its height would have better reach in this mode with an enhanced and expanded horizon to be more effective in that mode.

Such a feature would also make an even better case for selling pairs of gTMs, since both could be immediately useful to a single user when used in what I’m going to call “antenna mode.”

EDIT: I have had both BTLE and Bluetooth devices simultaneously connected to my phone as well whithout issue. I use that a lot with a heart rate tracker and headphones.

It would NOT mesh with other nodes unless Emergency Shout was enabled,

You can’t disable Meshing. More explanation may be needed as I don’t understand all aspects of your idea. Are you planning to connect 2 Mesh units to one phone?

No. I want to connect the usual one phone while linking to one other mesh unit that would normally operate in stationary node mode. When this new feature was engaged, it would act as a sort of a wireless coax to allow a second mesh unit to act as an antenna for the first in Shout mode. I wouldn’t say this was to turn the meshing off, but to more advantageously utilize Shout by letting you link to the second unit to broadcast Shout from a better placed antenna.

Based on what @danielagotenna and @Rahul_Subramany have said shouts will likely have the ability to make hops soon enough.

Not to worry though, we are hard at work on Aspen Grove 2.0 - which we believe will able to efficiently Ping nearby users via Shouts (including Meshed shouts!) and report back to the user.

2.0 will be in Q3 or Q4, but updates to Aspen Grove will start as soon as March

Bigger shouts would be great!

But the capability I desire would still be useful. It would provide an intermediate level between Shout from a single gTM and a mesh-wide Shout.

Likewise, in an area where the mesh is weak or non-existent, it would enable a better Emergency Shout option. I’m thinking throw a line up into a tree and raising the relay node to gain better coverage. You can already do this for meshing with regular messages and from a single gTM, but this feature could make this more effective.

Provided that a second level of Bluetooth or some other means could accomplish this capability, of course.

One thing worth considering would be to automatically link location reporting to Emergency Shout capability. This would address several problems. First, in an emergency situation people may not remember to include a location in an Emergency Shout. If you really need help, that’s a crucial step. Second, it would differentiate the uses of regular Shouts from Emergency Shouts once they do go mesh-wide. Third, it would discourage abuse of the Emergency Shout feature, rather like how 911 has you phone number when they pick up after you dial it.

The issue I see with adding too much gain to the Bluetooth Antenna is that with more gain you add nulls to the radiation pattern, meaning you will need to now in the direction of gain inorder to RX a Bluetooth signal.

Modification of BT antenna only really makes sense to me IF there was an ability to manage relay & unattached devices. IMO a better method would be switching of modes thru management frames via the Aspen Grove protocol and be authenticated by an owner key (stored in the app) Of course all of this would require storage on the GTM and I thought I heard there was only 8M on the device. (I could be wrong)

Jdogherman,
You’ve got a far better grasp of the circuitry tahn I obviously do. I could see a positive thing in BT antenna directionality in connection with my idea of using BT as a wireless coax to a GTM set as a stationary node. You should know which direction this is and it would limit the possibility in areas of dense use of interfering with others using the GTM in the same mode.

@giqcass is right - a single goTenna Mesh cannot talk to 2 phones at the same time.
In our investigation, we found that Bluetooth performance varies lot from phone to phone. Here is a snapshot of what we found:

@Rahul_Subramany Do you have more information on how the Bluetooth phone TX power data was collected?

The issue I see with adding too much gain to the Bluetooth Antenna is that with more gain you add nulls to the radiation pattern, meaning you will need to now in the direction of gain inorder to RX a Bluetooth signal.

Yes, that’s true but the intention would be connecting from the base of a mast or tower /tree/ect to a Gotenna that is high above the ground. One you deployed yourself. In most cases down is the only direction you would want to point the Bluetooth antenna. Ground radiation desensing the radio might be an issue in some places.