Gotenna Mesh acheived 11.33 miles distance from lone mountain to school! The goTenna on ground had a hard time sending delivery receipts back to the goTenna relay station on the mountain. 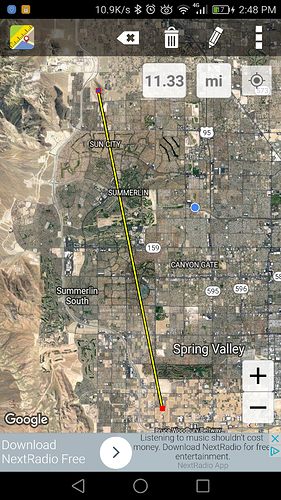 @danielagotenna Daniela, you might need to create some categories for these records! I mean, hard for us land-loving mortals to touch the glider or skydiver records…

Wonder what the record is for two boats/ships on open water…? Maybe create some sort of Leader Board somewhere on the site. Anyway, going off grid for a few days–see y’all on the flip side.

A few weeks back, I actually tried to send a message from Mount Vaca (about 2500ft up in the Blue Ridge) to the Sacramento River close to where I live. My brother was standing in a spot with a perfect line of sight. And, according to Google Earth, the straight lone distance was 33 miles. But no go. Maybe that was a little too far. And maybe the conditions weren’t too good (some fog). We also tried talking to each other with GMRS walkie talkies, and could barely get through. But there was LOTS of strange sounding interference. Not sure if maybe this was from the antennas up there, or whether this could have also been interfering with the Gotennas. In any case, I will try again sometime. Perhaps on a more clear night.

I will also try a range test from Mount Diablo to a friend in Oakley - about 14 miles away. This should go ALOT better. And maybe I can try progressively longer distances from mountaintops to see how far I can get.

I also recently did another range test close to where I live. This test was interesting, since it was over flat ground. I had one Gotenna about seven feet up in a tree in my front yard and another just across the river. The distance here is less than a quarter mile, but involves levees and trees. I figured reception would be better on the other side of the river with this node. And many messages did indeed go through this node. But at a few points, the Gotenna actually sent messages straight home - a distance of about four miles as the crow flies! Not bad for level ground!

I set up another node about three miles from the one across the river in order to test range further out. At this point, all messages had to go through the first node. Therefore, I think I can safely assume that ANY message that was meshed by only ONE node went through the node across the river rather than this node.

After going further out, many messages did indeed mesh through both of these nodes. But surprisingly, some actually meshed by only ONE node! And for the reasons above, I can only assume that the node through which they meshed was none other than the one across the river from me. One message sent in this way from a total of 6.26 miles away from home! This means the message probably sent over six miles between nodes! Not bad for just one watt and no external antenna.

@henry_sheard great idea. We could start a topic just to discuss records.
We don’t have a boat-to-boat or ship-to-ship record yet.

That’s awesome!!! I’ve done some serious range testing myself and it’s darn impressive what Mesh can do!