Hello everyone! I am George and have been doing GoTenna Mesh beta/alpha testing for the last six months and it’s been one heck of an awesome experience (not just skydiving! Most beta/alpha testing takes place on the ground and trust me the footage from that process is NOT at all as glamorous as the skydiving videos are. However both are just as fun!!!) . I’m also the current GoTenna Mesh range record holder (23 miles! Woot woot!). How did I end up jumping out of perfectly good aircraft with GoTenna!? Good question, I’ll let this interview by Nick Baker (The awesome GoTenna logistics coordinator) tell that story in the link below). So: Ask me anything!

We build mesh networks to power programmable mobile infrastructure on a global scale. Why? To decentralize connectivity and unlock society's ultimate last mile.

Added 7/26/2017: Here is the entire GoTenna Mesh record setting skydive, from start to landing. I hope you enjoy the video. I also need to thank the GoTenna app for saving my bacon on this jump. I could not see the landing area through the clouds, darn good thing for GPS and their map app having a quick refresh rate!.. 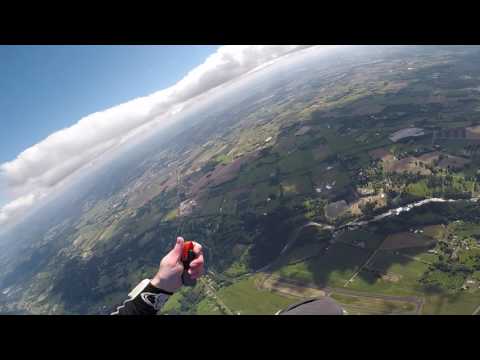 I really enjoyed reading about your skydiving adventures, George! Thanks for sharing them. What do you think it’ll take to break your current 23 mile record?

Heya George: Just to clarify - the 15 mi range record in the blog post was with the firstgen GoTenna? And the 25 mi record is with Mesh? Wow.

Can anyone explain to me why the Mesh is performing potentially better than v1? I know it emits half the wattage (1 W v 2 W) but presumably it has a better antenna since it can be smaller?

Either way as a firstgen GoTenna user this is very exciting! Just got my Mesh devices but haven’t used them outside of our backyard yet. Can’t wait

@femmesh, great question! I’m Jin, one of the RF Engineers at goTenna, and am excited that someone finally noticed the apparent paradox and asked about it. You’ve actually already answered 90% of the question - it’s mostly the antenna.

If you are not aware already, goTenna MESH uses the 915 MHz ISM (Industrial, Scientific, Medical) band in the US, while goTenna V1 uses 152 MHz MURS (Multi-Use Radio Service) band. The ideal, not miniaturized, antenna length for 915 MHz is around 3 inches, while the ideal length for V1 is around 19 inches! As you can imagine, the trade-off of miniaturization technique used for MESH antenna is much more forgiving than V1.

In addition, we took the steps to integrate the latest and best performing Low Noise Amplifier (LNA) in conjunction with proper filters on MESH receiver chain that improves sensitivity in a low noise environment. Finally, we took full advantage of the much wider authorized spectrum of tens of MHz in MESH vs tens of kHz allowed on MURS to implemented a more resilient custom communication protocol that is capable of automatic retransmissions across much more channels.

So even though V1 is more powerful than MESH in transmit power, the MESH makes up for it by everything that is described above during George’s daredevil test (BTW, I prefer to carry out my tests with my feet safely on the ground

However, I want to point out that V1 has moments that outshines MESH! Since the ISM band is a widely used spectrum by the wireless community, it could be densely occupied and noisy. In such environments, the narrower and higher power V1 will likely to outperform MESH, but in general, we foresee MESH to be the stronger of the two.

@Jin_Gotenna thanks for your very complete answer! You taught me a few things!

Thanks Michael! First a little background: Being up at 10,000+ ft gives me awesome radio line of sight. When I exit an aircraft I do so from about 15,000 ft AGL (above ground level) and by the time I have canopy (parachute) open and my GoTenna up and running I am about 12,000 ft. At 12,000 ft I have 134 miles of radio line of sight and at 5,000 ft (the altitude I start to focus on where I am going to land) I have 86 miles of radio line off sight. The short answer: What I need to break my current record is someone more than just 23 miles away from me while I am in the air, when we got this result I only had someone 23 miles away, thus the record was only 23 miles.

Again, thank you for your kind words and I am so happy you enjoyed reading about my GoTenna skydiving adventures, it was nothing short of amazing being able to do make those jumps! And of course: There is more to come

I know during this test it took me at least 17 minutes (likely longer) from the time I left the aircraft to landing on the ground. A regular skydive goes like this: Leave aircraft, fall for 60 second open at 4,000 ft and enjoy 3-4 minutes under canopy (parachute).

That’s why we test under canopy (parachute), it gives us the perfect environment for long range clear unobstructed performance testing. It’s also a whole lot of fun!

Thanks for reading I typed this on the bus ride home so please forgive any typos!

I think Jin answered this question way better than I could have! Thanks Jin!

Thanks for all you answers, let me know on #3 when you get a chance

The answer is 3.3 miles using two people and two mesh units set up as relay nodes, however on this test we were heavy into evaluating Mesh reliability not testing out max range hops. We should do that next! In this test we were in a suburban area with lots of hills, tress, and houses in the way. Basically getting in ideal locations to make the units Mesh, this does not reflect results you’d get out hiking or other outdoor activities.

The record setting GoTenna Mesh skydive: From start to landing…

@femmesh I think my range record in the air MIGHT be outdone on the ground!

Yep! HOWEVER! To be fair I think they would be about the same. More extreme range testing to come! Gotta do it to find it out!

A little bird in public safety told me they saw goTenna Mesh at a military demo, mounted on a drone, hit closer to 30ish mi… goTenna team, is this true?

A little bird in public safety told me they saw goTenna Mesh at a military demo, mounted on a drone, hit closer to 30ish mi… goTenna team, is this true?

My cofounder literally told me this is the case yesterday. Are you in cahoots?

@gua742 you’re gonna have to jump out of a plane again… hard life! Haha

I can beat that range!

What was the altitude of the drone? I’ll have to test this one out myself as well using my drone. On my list to do for sure! This is awesome.

Would there be any interference/issues having a gotenna mesh secured to the aircraft (drone)?

What was the altitude of the drone? I’ll have to test this one out myself as well using my drone. On my list to do for sure! This is awesome.

I am not sure we know the exact altitude, but this record was achieved at a public safety demonstration so they were probably using pro-level (i.e. non-consumer) drones, is my best guess.

Would there be any interference/issues having a gotenna mesh secured to the aircraft (drone)?

@Rahul_Subramany Do you know the answer to this?