Sorry if this has been asked before but, does the Mesh need to be pointed in a certain direction to maximize the range of the built-in antenna? Should I face the front of the Mesh towards the direction of other nodes or does it not matter? Thx!

Theoretically you want your Gotenna placed the same way the other Gotenna is placed. Vertically or horizontally although practically I’m not sure how much difference it will make given the antenna inside. I didn’t do any computer modeling or anything but I suspect the RF pattern would look a little like this with a very slight bias in the X plane (Right Left) and some bias in the Z axis.

The Z axis will likely be the most important. Please don’t take my word as gospel on this. 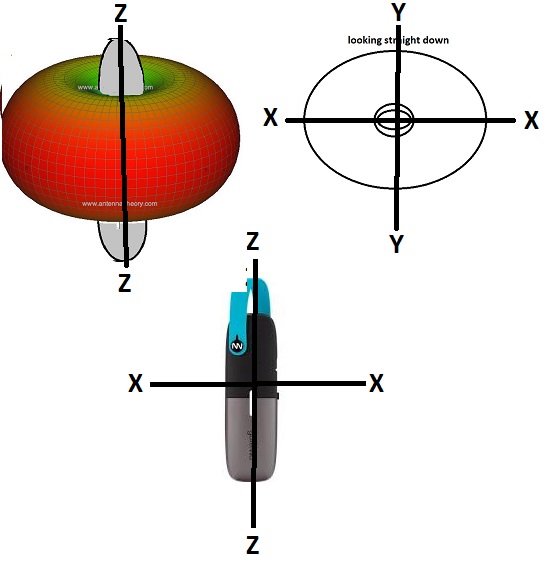 EDIT: I wanted to credit this website with the picture I used as a base.
http://www.antenna-theory.com/basics/radpattern.php

And the other picture is from the Gotenna website.

I believe that the above posted graph shows the radiation pattern for an ideal dipole antenna.

At ~910Mhz an ideal dipole antenna would consist two straight segments of wire each 3.1 inches long set end-to-end [1]. The goTenna Mesh is not physically large enough to house 6.2 inches of straight wire and therefore compromises had to be made in its antenna design (just like in every cell phone and other small form factor device).

I believe the antenna radiation pattern from a goTenna Mesh will be different from the graph above. I don’t “feel” like it will be a smooth shape like in the above post due to how the antenna traces are laid out on the circuit board but I haven’t been able to track down documentation on what kind of pattern to expect for antennas like the one in the goTenna Mesh.

If anyone has additional information please reply to this thread.

Theoretically you want your Gotenna placed the same way the other Gotenna is placed.

In practice, unless you have an “orderwire” circuit available to coordinate identical horizontal orientation by compass direction (azimuth), you’ll keep the vertical axis oriented properly, in other words vertically. Note the bias that exists in the design, with the strap set into the device to keep it, guess what?, vertical.

The horizontal axis generally takes care of itself if you keep the vertical axis properly vertical. No, it’s not an ideal whip and likely has some variance in the horizontal aspect of the emission pattern, but I’d guess that you will likely achieve a 95th percentile effective pattern (or better) horizontally so long as you maintain vertical orientation. Whatever variation in the horizontal pattern may exist, this is clearly not a directional antenna. The exact info on the pattern of the device is likely proprietary data in any case. Here’s a pic of the backside of the fractal antenna with the case stripped off. 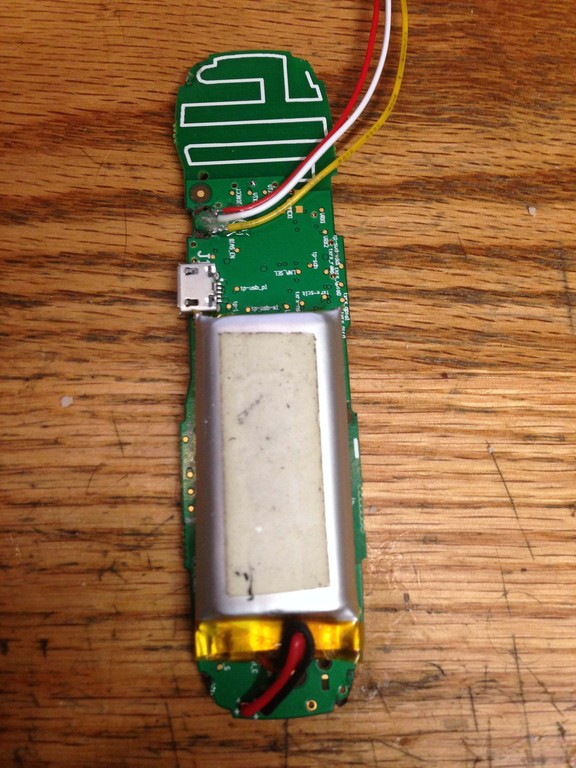 This is what the frontside of the antenna looks like with the fractal antenna showing above the metal RF shield. 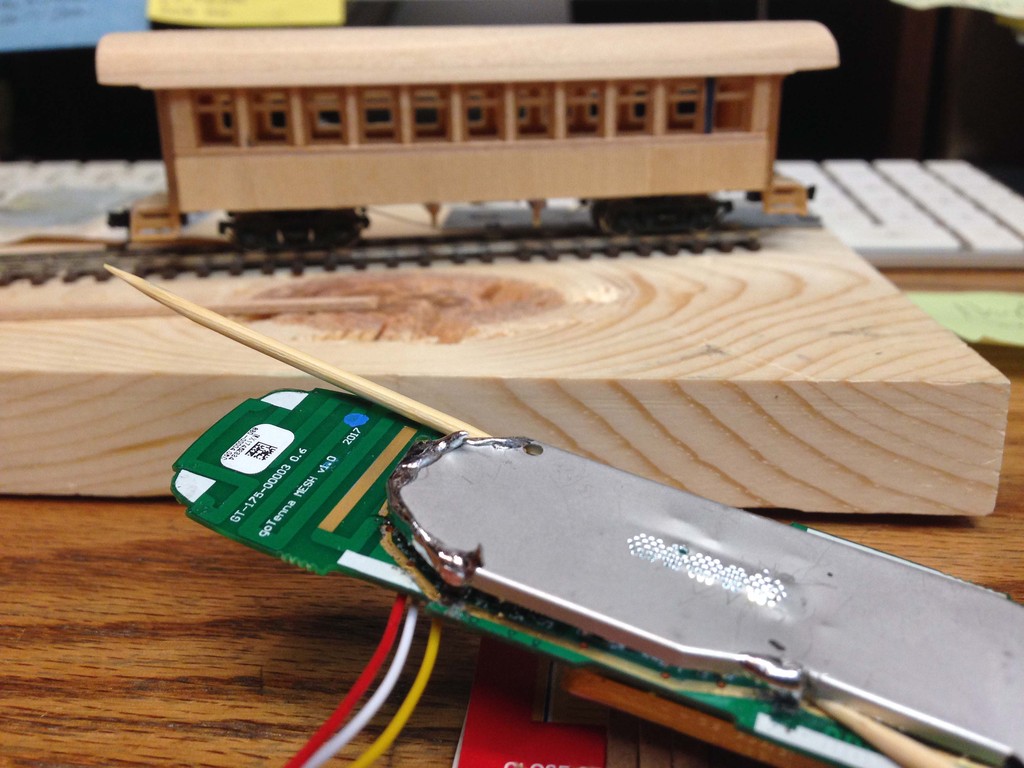 I believe the antenna radiation pattern from a goTenna Mesh will be different from the graph above. I don’t “feel” like it will be a smooth shape like in the above post due to how the antenna traces are laid out on the circuit board

While first impressions of the fractal antenna might suggest directionality to some degree, in practical use the difference is likely little if at all noticeable except near or at maximum range, maybe…and who wants to stand by on the orderwire to fuss and fiddle over squeezing the last little bit of performance when it’s not strictly necessary? Being able to access another relay node on the mesh network will provide substantially more effective range improvement than tweaking the last bit of efficiency from a fractal.

Thanks for your reply MikeL!

I agree that the orientation of an antenna is the most important thing to worry about (vertical to match what 99% of other users use!).

What I want to learn is the measured goTenna Mesh (GTM) antenna radiation pattern. Do the “flat faces” of the device radiate significantly more energy then its “edges”? If I knew this information I could orient my GTM so that the strongest signal is emitted towards the part of town where the most people are.

Thanks for posting pictures of a disassembled GTM. The pictures show that due to space constraints the antenna is “folded”. There is no way that the antenna in the GTM radiates energy out in the same pattern as the “ideal” antenna posted above.

Even if we disagree on the real world effects I think we both can agree that the GTM antenna radiation pattern is not going to match the “ideal” pattern posted above.

There is no way that the antenna in the GTM radiates energy out in the same pattern as the “ideal” antenna posted above.

No, and discussions of such patterns are never “ideal.” But if you think there’s something significant that can be gained by trying to get the last bit of performance, it’s easy enough to test. Simply set one up stationary at one location, then at another location rotate the other through however many compass points you think may be relevant. Most likely, you’ll note nothing different.

If you manage to find a distance at the maximum where the effects of rotation are noticeable, it will likely be observable in a very narrow window before loss of signal at the fringes of the coverage area of the signal. Unless that happens to be where the test case you need to make for connectivity happens to be, then the practical difference, measured in the overall radioscape footprint of this single set of two devices, will be tiny compared to the overall area of connectivity where you’ll receive the signal just fine without being fussy about the azimuth.

In practical terms, placing the emphasis where you are also assumes these devices only operate much like a conventional radio where the only thing that matters is seeking the max distance for useful work between just two radios. While somewhat interesting, this notion ignores what makes the goTenna Mesh unique, it’s ability to mesh and hop via multiple relays to virtually create a far more capable ad hoc network.

The best solution to the problem of intermittent fringe reception in a GTM mesh system is to place a relay node between the respective endpoints. The device is optimized around the engineering goals of mesh networking, not the old point-to-point pattern of conventional radio.

Thanks for posting pictures of a disassembled GTM. The pictures show that due to space constraints the antenna is “folded”.

Don’t mistake “folded” for fractal. These are different concepts in antenna design, one rather crude and mainly about squeezing a long antenna into a small space while accepting the loss of performance and efficiency that is inherent to folding an antenna into a small space. Fractal antennas may look similar, but such a design seeks to maintain performance or even increase it. This has been a modestly controversial claim in the past, but further research seems to confirm the performance improvements available via carefully calculated fractal design. See https://en.wikipedia.org/wiki/Fractal_antenna

Some still insist otherwise, but the evidence for that I’ve seen seems to misunderstand the importance of proper design and appears to rely simply on the iterative aspect of fractals, a gross oversimplification of what’s going on. See http://www.antenna-theory.com/antennas/fractal.php

Hi MikeL – I feel like we are talking past each other but that’s ok because we are starting from different assumptions.

“Usually” one can google antenna radiation patterns and learn which way to rotate an antenna for the best performance but I haven’t been able to find that information for the goTenna Mesh. I’m new to this, so maybe it is common to not be able to discover this information for commercial devices. I agree that the rotation of the Mesh antenna probably doesn’t make much of a practical difference – maybe only an additional few hundred feet of reach – but that additional reach could be helpful in my situation.

I originally posted in this thread for two reasons:

Corner Reflector Antenna test with Gotenna you can see from that link that some “directionality” can be achieved. I use a piece of aluminum foil 18cm behind my mesh units as stationery relays get about 200m more distance. At one Watt at this frequency distance is better achieved through height. Every 10’ higher seems to give me another 200m of distance. I’m at my max distance w/ height + reflector at this point.

I have a Mesh set up as a stationary relay. I want to rotate my Mesh device so that people downtown have the best chance to reach my relay.

Yes, it’s sometimes the case that antennas have a distinct pattern so that reorienting makes a substantive difference. The bar antennas in old AM radios as are an example of that sort of thing. I strongly suspect this is not the case with goTenna Mesh because of the requirements of system design. With mesh networks, the next contact can come from any direction and a transmission would, also. An antenna that demonstrated sharps peaks and nulls would be very problematic. While it looks like it could be directional, in designing the fractal antenna I’m certain that omnidirectionality was an important goal of the engineering that went into it. It may not exhibit an ideal pattern, but I’ll bet it’s much closer than you imagine.

Do you already know that there is an issue in making this hop? If so, then the experiment I described earlier would be worth performing if you do need to squeeze out the maximum distance.

“Usually” one can google antenna radiation patterns and learn which way to rotate an antenna for the best performance but I haven’t been able to find that information for the goTenna Mesh. I’m new to this, so maybe it is common to not be able to discover this information for commercial devices.

Patterns in use by amateur radio operators are very commonly found and I suspect that’s what you’re describing. But for a proprietary device like the GTM you’re taking about specific design data that companies have a legal obligation to preserve in the interests of their owners and stockholders. These represent the fruit of considerable investments in R&D. If the Idealized image used comes from goTenna, that’s a pretty strong indication that’s all they’re willing to say about the matter.

I suspect any practical difference you find will by substantially less than that. If it does happen to be that much, then experimentation will soon reveal such peaks and nulls, but only if you’re at the fringes of reception already. Having used them a lot, I’ve noticed nothing like that, but I didn’t try to make any systematic exploration of this possibility.

I originally posted in this thread for two reasons:

I think in practical terms, the graphic is plenty accurate enough. AFAIK, there’s no evidence it is misleading or that significant variations that would affect user experience exist.

To find out if anyone has information on the radiation pattern of the Mesh antenna. Looks like the answer is no.

I’ve noted there is considerable info pointing toward the omnidirectional nature of the device, so the answer isn’t no. If you come up with evidence that shows a substantial peak or valley/ null, such results would be of interest.