I have talked before about our efforts to incentivize mesh communication with the Lot49 protocol, based on the Bitcoin Lightning Network.

Part of our efforts working towards that goal is to show how long range gateways using fixed radios could also be part of this system.

To that end, our team has been working to adapt our lnproxy project to work with the fldigi software and an amateur radio system. This open source project is called fldigi-proxy.

If you’re interested in mesh communication, Bitcoin or Amateur radio you might find this project interesting. We are also eagerly looking for ham radio operators interested in trying this out and giving us feedback.

Here’s a movie we made using a local audio loopback (instead of two radios) that demonstrates the protocol in action. The upper two windows are the two fldigi (amateur radio modem) software running on the same computer and negotiating a Bitcoin/Lightning channel update. 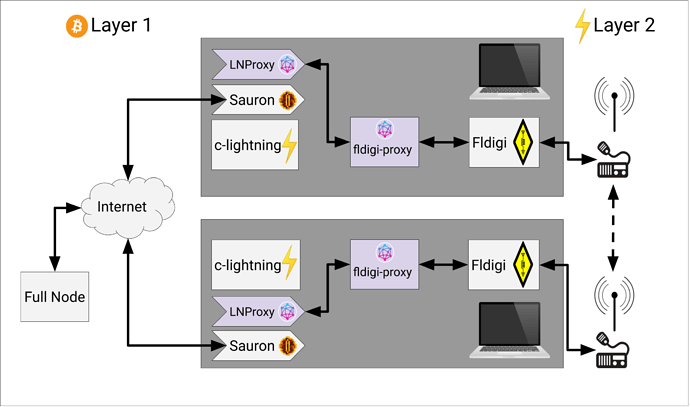 Why not go simpler and use a credit-debit system managed independently by each mesh user? Bitcoin is actually pretty heavily centralized.

If a person uses bandwidth from my mesh transmitter, my device would record that in its own ledger to say that they owe me some bandwidth usage. If that bandwidth favor isn’t returned in a set period of time, they owe the owner of the relaying mesh device a certain amount of money (silver or gold, ideally) within a specific number of days, or their access to that device is cut off or limited.

Why not go simpler and use a credit-debit system managed independently by each mesh user?

I wish it were possible to have a lower-overhead protocol, but it’s hard to create a system that can extend trust over multiple hops in a trust minimized way that doesn’t also require a trusted third party.

Imagine A and B have a local credit/debit system setup. A asks B to forward some messages through C to D and A moves some credit to B when the messages are delivered. B has to make a similar promise and delivery to C for every message forwarded. What happens if A disappears and reappears under a different name after B delivers the messages? Now B is out the credit they promised to C and has some useless credit from A they can never use.

If we back this with silver or gold, how is that checked and guaranteed? you quickly end up with a central repository that everyone trusts to make that system work. Does each node have an identity they must verify to prove their credit at the gold repository is good?

Once you have an identity and repository, you open the system to centralized censorship and surveillance. At that point you might as well use Paypal. Using a centralized system requires practically no overhead and is simple to implement.

They could not hide easily because their physical location would be known. Verified ratings would keep the cheaters away.

If a person uses bandwidth from my mesh transmitter, my device would record that in its own ledger to say that they owe me some bandwidth usage. If that bandwidth favor isn’t returned in a set period of time, they owe the owner of the relaying mesh device a certain amount of money (silver or gold, ideally) within a specific number of days, or their access to that device is cut off or limited.

I rather liked the idea of the use of cryptocurrency to incentivize nodes hosts in some way as a way to encourage their creation and placement. The idea brought the often arcane theory of cryptocurrency and connected it to something practically useful for a change. Many cryptocurrency apps seem to be complex solutions to problems most of us haven’t found a need for personally.

That said, I just don’t see much future for the idea that any value created can be cashed out for economic benefit. The mesh is founded on the concept of emphasizing the common good. Privatizing it for profit seems the wrong way to go. Calling them “cheaters” is unproductive. There is no cost to being able to excess the bandwidth that is always there anyway, so I don’t see how turning relays’ into profit centers reconciles with keeping a commons available. There’s no way to selectively prevent its use by others or to allow it’s use only by those willing to fork cash in some way.

There really are cheaters out there trying to hack systems, and cryptocurrency has that name for a reason.

Most people don’t understand the mechanics so they cannot tell when they’re being ripped off by the administrators of a cryptocurrency just like with major banks. For all we know, the cryptographic algorithms could be using our computers to run a centralized AI supercomputer without general knowledge of it in the case of Bitcoin or others. There are a lot of unknowns in contrast to gold and silver that people can feel and touch.

Sure, the attraction to blackhats of cyptocurrency is that it’s a ripe target accessible via the internet.

Not sure how that connects to the TXtenna project or other contemplated or current mesh projects. My understanding about it was that the goal wasn’t to convert it to cash value, but to better allocate scarce resources on the mesh - or something to that effect, That would tend to discourage those seeking to rip things off for the money. Leave out the possibility to cash it out of the system and you greatly reduce the potential attractiveness for hacking, a very good reason to avoid that option altogether, rather than institutionalize it.

Allowing essentially the same thing to happen with gold or silver, however that value might be cashed out of the mesh system, would make it even more attractive to bad actors than cryptocurrencies are.

Then there’s the fundamental problem of privatizing what is supposed to be a commons to turn it into a private profit center. That would tend to undermine the concepts that mesh is based on.

Mike, you’re turning concepts totally backwards in your interpretation. It’s not opposite day.

Decentralization and easing away from corporate consolidation allows lots of small businesses and individuals get paid for their contributions, which are bandwidth usage in this case. Existing internet service providers hoard the infrastructure to themselves and take the profits too, so someone has to get paid for the service. Txtenna or Gotenna could try to do that too, but it will not be anything new or exciting because it would simply be a continuation of the existing LTE network except with probably more radiation to fry our brains. If GoTenna wants to do something good for the world, it will set up software that allows individuals to collect money for usage of their mesh devices. These devices could also include ethernet ports for direct connections from house to house.

It’s not opposite day.

Actually, sounds like you’re trying to turn mesh users into the Uber drivers of the internet. Dangle a few pennies to lure people into investing into providing last mile service for the commercial internet or something very similar.

Thing is, with goTenna there’s no need to monetize what inherently already works quite well as a commons, where individual gain is always connected to a contribution to supporting the infrastructure everyone relies on.

I am a mesh user, MikeL!

You say pennies, I say gold and silver. That’s real money. The network is only reaching a tiny fraction of its potential.