Building a MOAN into a car

This thread highlights my project, but is open to others integrating a Mesh unit into their vehicles, as well. I felt this differs from the other MOAN threads due to different equipment involved and a different application.

Having a full-time node built into the car allows the creation or extension of a mesh network. For example, it can help relay signals when parked outside a shopping mall between the interior and exterior. Mesh units in the mall would relay through the mobile MOAN to reach further away from the building or to reach another part of the building. If parked on top of a hill, the mobile MOAN would allow communications between the two valleys. If parked at a fair or other event, it would provide coverage for other Mesh units that may be out of range of each other, but in range of the mobile MOAN.

Will the linked antenna below provide adequate performance?

Having used an external antenna with a cellphone (when phones had built-in antenna bypass) in a car, I would say yes. I think it was smaller antenna, but with similar gains. There is a small but noticeable bump in connectivity. No hard numbers, but at the time I couldn’t get a signal in my car in my garage. However, with the antenna could make phone calls. Not super reliable, but I had better connectivity.

Will the linked antenna below provide adequate performance?

I don’t see enough information to make a good recommendation.

My first complaint is that they list in DBI which is gain over a theoretical perfect isotropic antenna. I’d rather see DBD numbers. That isn’t a deal killer. My second complaint is much bigger. When you linked to the antenna the meta information says the antenna is 3 DBI but the specs on the site say 5 DBI. That’s a big difference. I recommend you contact them for clarification. Finally it’s Mag mount. If you are planning permanent installation an antenna meant for a permanent mount could give you superior performance because it would have a superior ground plane.

Get the actual specs confirmed which I believe is 5 DBI or a little under 3 DBD. See if you can get any other info from the dealer before you buy. It would be nice to know what SWR you could expect in the ISM frequency range but you could tune the antenna later if you know anyone with the gear.

Not a bad idea! We’re using the Voltaic V44 for our permanent relay station build - should keep your GoTenna Mesh powered up for ~ 2 weeks. Hard to find any tech specs on the mag-mount omni antenna you linked to. Just subtract 2.15 from the dBi value to get dBd. In general, omni antennas are low gain, closer to unity-gain. You won’t see high gain values until you start looking at larger size, 4-6 ft in length, which is not practical for a vehicle mount. I would probably rule out that antenna just based on the connector, which is reverse-polarity TNC. SMA is going to be easier to work with. Maybe check out this one: 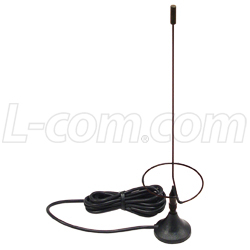 If you order any product from L-com these days, make sure to call in and inquire about your order. They recently changed over to a new ordering platform and they are experiencing some difficulties in getting things shipped out in a timely fashion… at least that’s been our experience!

Let me go on record that I wouldn’t recommend a multi band antenna like the RE905U-SMA. You won’t get resonance on 800 mhz and 900 mhz without some compromise in efficiency.

Perhaps I’m too picky but the antenna is arguably the most important part of a system.

If you could find someone to help you tune it this is what I would probably get. What you will notice is that it is NOT a 900mhz antenna but the whip can be cut to length and then it would work great on the 900 mhz band. The connector is NOT ideal. I would definitely change it or better yet just wire it directly to the Mesh.