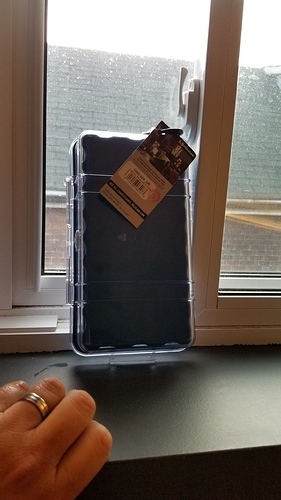 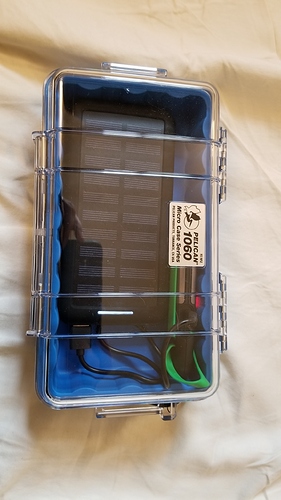 What solar battery are you using?

https://www.amazon.ca/gp/product/B079ZK232P/ref=oh_aui_detailpage_o04_s00?ie=UTF8&psc=1 I have located it in a place where it will get minimal sunlight. I am interested in actually draining it.

Nice. I like the fact that it has a Lightning connector as could be useful if paired with a iPhone for whatever reason. Plus the fan option could be useful for cooling in the sort of enclosed cases I use. Looks like the solar panel is rather limited as they are in this form factor, but may be enough to power a GTM. Looking forward to your results.

Quick update I disconnected it for a few mins because I decided to set the GTM to relay mode. That said unit and battery are still going. 24 hours later.

OK so I didn’t get more than 4 days out of this setup. I’m interested in the power draw from the GTM. I’ve come to the conclusion that the Solar panel in the battery is near useless. Going to work on a solution that fits into 12" x 12" outdoor electrical box.

Is the battery pack a “pass through” one? If it is not pass through it won’t charge both the battery and any attached devices at the same time. I’m using a Wasserstein solar panel with a RavPower 20,100mAh battery pack and can get 30+ days in good conditions. 2 weeks in worse conditions. I’ve been debating using a larger solar panel than the Wasserstein but have limited window space for all the devices.

It’s a little hard to see, but looks very similar to the battery packs I’ve been using lately…umm, the ones that are obviously mislabeled much higher than actual capacity.

The solar panel part looks identical. I think someone told me the output is around 1 W, which is just not enough to keep things going with a goTenna Mesh while charging the battery, whether or not it passes through. They’re not meant so much to charge the battery pack, but to provide some last ditch backup if you need it on long trips where you might exhaust the battery. That way you could charge your cell or sat phone enough to connect if need be.

You can get away with less during the summer in the Midwest , but for year around charging that should take you through the winter, 6 watts seems to be the magic number here at 40 North latitude.

@mikel you’re wrong I get 6 watts out of these panels as measured with my USB power meter. The problem is I don’t get enough sunlight due to foliage and other obstructions so it is about 3-6 hours tops of top power only. Please stop being pedantic. I’m in Indianapolis so pretty much same latitude as you. I just have very difficult, urban/foliage obstructions you probably do not have in Urbana. 6W doesn’t do it for me here. I have a 16 and 20 W panel I’m going to try next but that will take more logistical planning.

@mikel you’re wrong I get 6 watts out of these panels as measured with my USB power meter.

I’m talking about the panel that’s pictured at the top of this page. Is that the same as yours? Unless this one is much larger than I imagine (using the Pelican box as a reference, which is 9.37 x 5.56 x 2.62"), it’s very close to the same ones on my battery packs. I don’t even try to use that for making power, they’re packed inside the closed, opaque case.

The ones I have list the solar panel output as 1.5 W. I’ve not measured the output directly, but have heard it’s somewhat optimistic, but would think 6 W out of that is really optimistic. The capacity is listed as 20000 mAh, but it was sold as 8000 mAh.

I hear you on the leaves. You can’t always anticipate their growth. Fortunate here most nodes are sited on rooftops clear of vegetation that could shade their panels. Leaves do cause some interference with signals getting through which we’ll solve by adding a couple of new nodes.

Have you considered remote mounting the panel in bad locations? It gets pretty expensive to up\ the size-of your panel to deal with obstructed views.

No I have a separate panel not the one pictured above. I’m already 40’ AGL and no options for remote mounting.

whats the wattage of the solar panel?