Just thought I’d share a few little notes on some battery-related experimentation that I did with my GTM. Having rushed into the disassembly process, I ripped the sheating on the original Li-ion battery off, and not wanting to cause a battery fire, I chopped the leads right off almost immediately after. For the better part of my 1 year ownership, I’ve run battery-less with USB power always on. I was going to run this as a POE-powered relay, so I didn’t think it was going to matter to much.

It turns out it does. My GTM (v1.0 board dated 2017), does not like not having a battery connected at all. If operated without a battery, it will power on, however the red power LED with flash dimly, intermittently. It will pair, but messages will not go through. The white LED normally indicating a transmission just flashes over and over again until the unit is powered off and back on. I’m thinking this probably has to do with the radio pulling directly from the battery, with a diode setup that prevents the charge circuit from feed it directly. All other functions seems to work fine, I even did the firmware upgrade without a battery (reckless, I know).

First takeaway: if you have a dimly flashing red LED, your internal battery is likely toast.

I had some spare 18650s, very popular lithium cells that have the same nominal voltage albeit much high capacity, so I hooked one up to the battery terminals for testing. 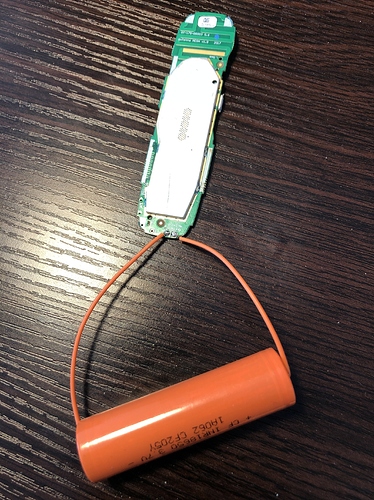 The one you see here is a cheap chinese cell out of an aftermarket laptop battery that had failed. Simple voltage testing told me it was good, but capacity is both not on the cell, and untested since I don’t have the hardware to test that right now. It’s likely a 2000 mAh cell, which puts it at nearly 4x the capacity of the original Li-Po battery, rated at 589 mAh.

The charge circuit liked this one, which was expected since Li-ion and LiPo share charge profiles, from what I have read. Charging took a while, I measured charging at 15-16 mA at around 50% charge, but I don’t really have any data that would give away the charge curve. Charge voltage reached normal Li-Ion charge voltage, 4.3 if I’m not mistaken.

The charge level indicator is all sorts of messed up with the 18650 connected, it’ll show 0 and 100 and nothing in between. There is probably some sort of calibration mechanism that needs to relearn depth of charge, I have not tested that far.

I’ve mesured standby draw at around 20mA in bluetooth-connected mode, which would amount to a 4 day battery life on a single cell like this. I got to 4 days out of it in real-life testing, mostly with the unit staying in standby, spending maybe a few hour a day flashing (bluetooth disconnect state), voltage was still showing north of 3.6v, at which point I had to leave for a while, so I disconnected the setup. Maybe the cell I had is more than 2000mAh after all!

Quality 18650s can be harvested from all sorts of electronics, high quality cells can do 3Ah and more. That’s 150 hours on bluetooth standby, 6+ days, if we’re to trust the reports of power draw halfing in relay mode, that’s potentially 12+ days!! With a 3 cell parallel configuration, we’re looking at over a month of endurance potentially.

2nd takeaway: 18650s are a better choice than a USB battery bank and will work.

Since I still wanted to go battery-less for POE operation, I tried replacing the battery with a small cap rated for well about nominal voltage, 220uf 6.3v. The idea being that I’d want my unit to be in the attic of my house which gets VERY warm, and where heat-related battery failure could potentially mean important property damage a very unpleasant discussion with my insurance company. 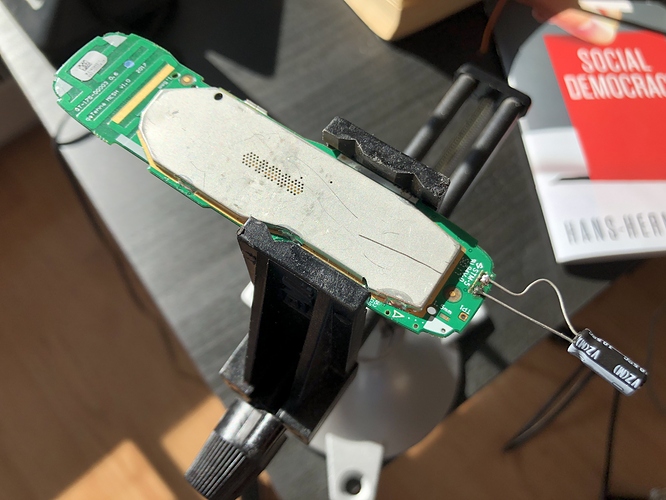 The charge circuit did its thing and I got LiPo peak charge voltage quick enough, but still got the flashing red light. Transmissions did not work.

I’ve crunched some numbers, although these calculations are a bit arcane for me. The cap stores 0.00184900 joules at 4.3v. I’ve calculated around 60mAh draw while attempting to transmit, but this is likely really off since I calculated with a very low resolution multimeter. At full charge voltage, this is about 0.25 watts. Assuming half a second of this transmission power draw (here again I’m spitballing, no scope to test this out), that’s 0.129 joules. Even at 0.25s transmission time, we’re a full decimal place away from even being remotely close. Long story short you’d need a much bigger cap to make things work. It doesn’t seem worth it to get this working unless you have VERY serious environmental constraints which make battery operation a no-go.

I hope that some of this is helpful to somebody.

I was looking at 6x 500F super capacitor banks with an eye toward building battery-less repeaters capable of at least -40° for hours just today. All great info. Thanks!

Even at 0.25s transmission time, we’re a full decimal place away from even being remotely close. Long story short you’d need a much bigger cap to make things work.

What may work here are super caps. They’re small and pack a wallop. I’m a model railroader and these are used in “keep alive” circuits. When you hit a dead spot or dirty track, the keep alive supplies onboard power to your decoder so the loco doesn’t stall or stumble.

Keep alives come in different form factors, mostly fairly small which is ideal for using with the petite goTenna. They have different brand names but all do pretty much the same thing, like this CurrentKeeper by Soundtraxx:
https://www.soundtraxx.com/access/wiring.php

Cost is a factor, though. You can get them cheaper in raw form than the nicely packaged CurrentKeeper. Search for “super caps.”

What may work here are super caps.

Absolutely. I edited my reply to reflect intended to discuss super capacitors as well. @max302 was using 200μF capacitor, and 83.3F (not micro) banks can ne had for ~$40. Those can then be paralleled as needed.

Converting capacitor power to amp or watt hours is still a bit hazy in my mind, but suffice to say the power is far less dense, and significantly more expensive per electron. That said, they mostly seem to be rated to -40°, whereas the Li nattery variants have a dropoff in output power below freezing to -20°C (-4 F?), and can’t be charged below freezing without potential damage.

Based on the following video, the $40 83.3F super capacitor bank tested an actual capacity of 59F, and usable capacity of 120mAh @ 12V. Not overwhelming!

For clarity, is the original GTM battery Li-ion or LiPo?

Not sure what the voltage is on this but…

If the standard mobius battery is a regular lipo at 3.7volts then perhaps this would be a plug and play solution. 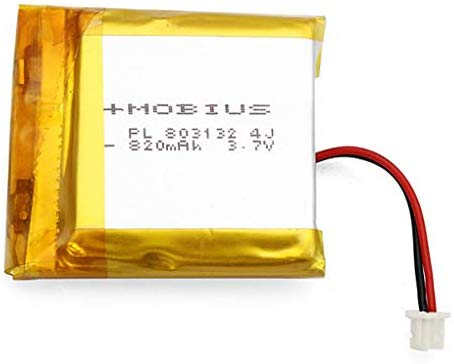 A thought on the difficulty in getting the GTM to operate on the various batteries. Might a diode across the leads be helpful? Could it be built into the battery and thus lost when the OEM battery is extracted? I know they are used in some cases with power supplies, but not sure exactly why or how…so don’t experiment with this until you do your due diligence research for safety.

Sorry for the confusion, original battery definitely is a LiPo.

I’ve been playing around with spreadsheets and capacitor math a bit today.

In theory, assuming the measured 59F from the video, 3 of the $40 super capacitor banks would equal 639mAh with a full charge (16.2V), and draining them to 3.2V (guessing at the GTM’s lower cuttoff). That’s about an 8.5% overhead compared to the rated 589mAh capacity of the OEM LiPo. By the time we deduct voltage conversion inefficiencies from the capacitory bank and the difference between rated capacity and reality of the OEM battery, we might still be in the ballpark.

So… in theory (and ignoring the new problems caused by charging the capacitor bank), the battery bank could be replaced with capacitors, and without losing theoretical capacity, could be swapped out for about $120.

I think your assumptions are wrong. Assuming that you’d be wiring your supercaps directly to the charge circuit, which you’d have to do to get rid of the OE battery, the charge circuit would only charge to a peak voltage of 4.2v across the bank (I was initially incorrect, it’s not 4.3v), so although your caps are rated for that voltage, you’d still get total joules stored calculated on that voltage.

Paralleled caps WITH the OE battery might be the way to go, for fast charging and a certain level of endurance and energy density. Degraded LiPo performance on a cold battery might still be better than just the caps.

As I mentioned, I didn’t intend to deal with the charging in my previous comment. I don’t expect at all that the GTM circuit would be useful for charging 16.2V of capacitors. The idea would be:

It may very well be that this won’t work if the GTM won’t function if the charging circuit is disrupted. But if there’s sufficient current, and proper voltage, there’s a reasonable chance it would work. In any case, I’m not sure we can conclude capacitors absolutely won’t work based solely on the tiny one tested in the OP.

Even if it “works” with bigger capacitors, it still might be too kludgy or expensive or otherwise far from ideal. As I saw @MikeL discuss in another thread, there’s apparently a big problem returning to the proper state in the event the power dies, so there’s a good chance that alone is a deal-breaker.

It remains an open question whether keeping the LiPo (or 18650) in parallel with caps would be better at subzero temps. If that worked, it would be great!

I’m at 65°N, so I realize my parameters aren’t shared by the majority of users. I very much appreciate this thread, and consider it a good starting point for more experimentation.

Sorry, hadn’t understood that you’d charge the caps out of band. That makes perfect sense, if there’s a diode in your buck converter I don’t see why that wouldn’t work. I’m guessing I was projecting my use case onto yours with the charge system re-use part.

Check out this thread where the user build a little rig to do hard resets when required: Help with Python coding to make the goTenna stay on. OP has a functional prototype now.

Other little observation, while checking amperage draw the additional cabling set up in the battery circuit caused the faint flashing red, despite the fact that there was no significant voltage loss at the battery terminals on the GTM. Maybe the charge circuit is sensitive to battery impedance or something?

@max302 Any updates on your to-do list? Were you successful in keeping a battery-less-always-on GTM?

With a similar project I had some success with this 4.0F capacitor

I changed jobs and had to put this on the backburner, so unfortunately no.

However, looking at my previous interactions with @rogeroverout, it seems that he has done more work on getting bigger onboard batter banks and arduino-controlled relay activator working.

My very simple arduino code for relay mode activation is on github: https://github.com/max302/GTNWatchdog