Yes, that’s the mode the battery is in when you receive it. Press the button for about 6 seconds and it will turn into always on mode. Then the battery will continue to provide power until it’s drained. If it’s drained and the sun starts charging the battery again it will automatically turn on and start providing power to the gotenna in the always on mode

Here are some pics of the project. Gonna put this outside now to see how it performs. 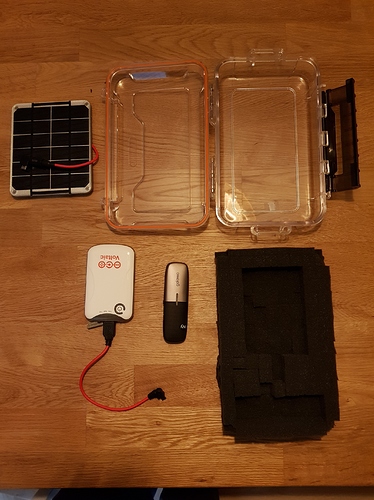 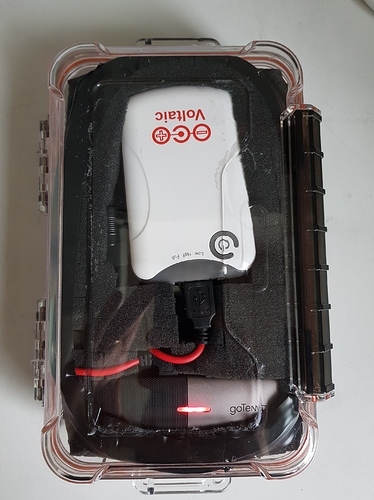 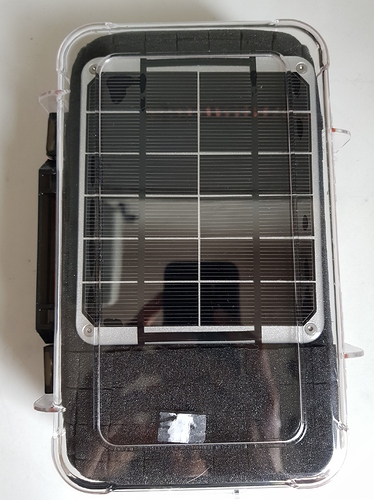 Make sure you have breathing holes to vent out any heat buildup.

Is the solar panel waterproof?

Yes, that’s a good recommendation! I myself am more worried about the cold that’s knocking on the door of Stockholm, Sweden where this is deployed.

But for anyone in the warmer climates who want to make something similar that’s a good idea.

The solar panel is waterproof so you can put it outside of the case if you like. That’s probably a better solution and to put the case in the shade to prevent from overheating

Yes, that’s a good recommendation! I myself am more worried about the cold that’s knocking on the door of Stockholm, Sweden where this is deployed.

But for anyone in the warmer climates who want to make something similar that’s a good idea.

Mesh is designed to work between these temperature ranges: 4 F to 140F

@rmyers look, there’s someone else from Sweden in our mesh network

All I know is that MOAN has been doing a great job however it’s going to only get better!
Max range so far is 9.80 miles BUT we are going to + the dBd of the antenna AND use directional antenna(s) to really get this thing going! No to far off in the near future the Seattle area with be all meshed up. It’s not a dream: It’s what I am going to make happen. 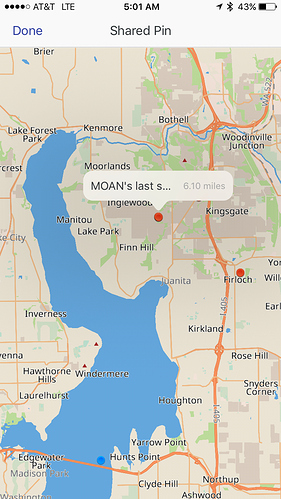 I was reading through this thread from the beginning and was just about to recommend the same kit from Voltaic. I have their V72 battery and 17 watt panel which unfortunately lacks the always on feature. Other than that, Voltaic is quality stuff. Those smaller packs have always on, and I’ll likely be picking one up for a dedicated node. Just ordered a 4-pack earlier today and excited to get started.

Hello @arcturus. Curious if you were able do any testing with your kit unit? Thanks.

Whoa! That might to big, I think I found the perfect one though…
Here is the link BUT watch the video first! And you know @amon and I are all up on the MOAN unit (and mini MOAN!). This panel can go on a Pelican 1030 case easy and not mess with the RF, I show y’all my V1.0 ASAP! 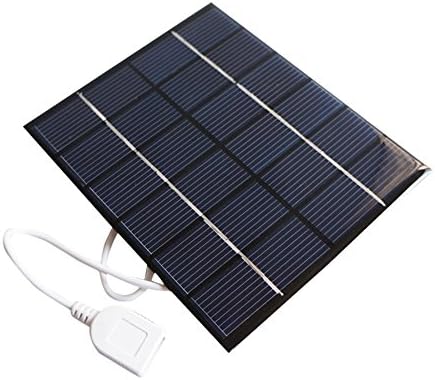 Yes, the solar panel doesn’t seem to be effective enough when placed inside the case. The external battery had drained to 50-75% yesterday, so now I’ve placed the panel outside of the case to see how that works. The external battery seems to drain quite fast when in the always on mode so I’m also gonna test to see how long the battery lasts without the solar panel connected. I’ve got two batteries so doing the tests simultaneously.

Thanks for the update @arcturus. My guess since the solar wasn’t that effective inside the case this may have had a impact on the external battery. Look forward to your updates. Thanks for posting.

I am trying a few other options for dedicated power, using usb to cat 5 extenders and supplying power from the grid.
I am also exploring the solar option, but that is well covered.

Great thread! Thank you all for sharing in this great adventure. 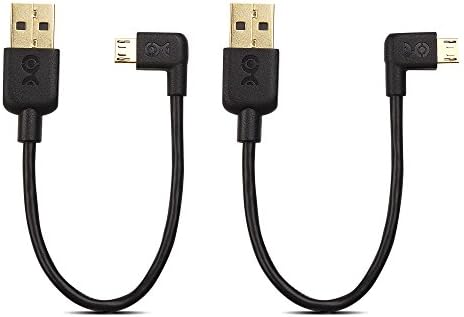 @dbfish how are you attempting to mount the Mesh device?

Using either a conduit box or small pelican case with a foam insert.

@mark So, the external battery that was not connected to a solar panel lasted about 4 days. And the 2W panel was unfortunatly not able to recharge the battery fast enough. It’s been a bit cloudy here while testing so it might work in areas with more reliable sun hours. Right now I have the gotenna connected to a 15W panel which is more than enough. Next week I’ll try a 4W and a 9W panel to see how that works out. I’ll keep you updated!

Question, I am planning to mount a Mesh unit on a ham radio repeater site located on Sulfer Mountain, CA.

Planning on housing the unit in a PVC pipe and use the available 12V power to feed the Mesh with a 12V USB power converter.

Question:
Can I just turn the unit on or do I need to do something to make it work as a 24/7 mesh station?

Just turn her on and that’s it.

Just turn her on and that’s it.

The man is right! If a Mesh device has never been paired to phone then it’s a simple as that. If it has previously been paired to an iOS or Android device just follow the instructions in the app to unpair the device and make it a simple relay node.